Fast Track on An Teallach

Posted on February 11, 2013 by Simon Richardson 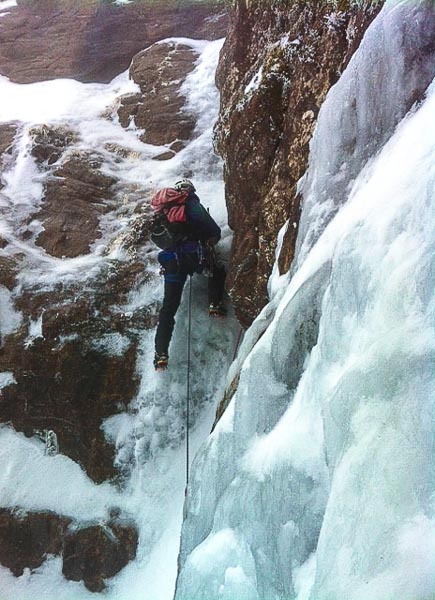 Andy Nisbet on the first ascent of Fast Track (IV,4) on An Teallach. This long hidden gully leads up from Constabulary Couloir on to Corrag Bhuidhe South Buttress. (Photo Pat Ingram)

Andy Nisbet has made An Teallach his own this winter with a series of superb new routes. Here is Andy’s account of his latest adventure:

“As Pat Ingram and I drove to An Teallach on Sunday (February 10), I was amazed to see not a single car in the Shenaval car park. I told Pat it was the first time, even a wet midweek, that I’d seen it empty. So obviously there was no one in the climbers’ pull-off, despite the NW having by far the best weather on a Sunday with south-easterly winds, and An Teallach being in particularly good nick. An Teallach has been particularly snowy this winter, not always an advantage but good enough to make this my sixth visit this winter, two of them being flops due to excessive snow and verglas. But a big thaw on Saturday was actually what An Teallach needed, despite the usual UKC predictions of doom and gloom.

Pat was really after ski touring into a remote crag, but talk of an unclimbed gully full of ice was enough to tempt him, although I admit to being very relieved to find ice as we plodded up Constabulary Couloir in deep wet snow into the mist (although there was a slight crust and the temperature was just below freezing). I had seen this hidden gully, which leads up from Constabulary Couloir on to Corrag Bhuidhe South Buttress, three times this winter, as you only really see it from the buttress above Lady’s Gully. Each time I saw it there was more ice but it still looked quite steep.

As soon as I made the first ice placement and the axe pick sank solidly in to the hilt, I knew for the first time we’d made the right decision. This introductory ice pitch led into the main gully, which then curved left into steep ground. With the mist being so thick, the line of white ice in the back of the gully seemed to disappear into vertical walls and I admit to being rather intimidated by the spooky atmosphere. But Pat clearly wasn’t and ran up a 60-metre pitch with our 50m ropes and only stopped because there was a fork, each branch filled with what was proving to be the most perfect ice.

We decided on the left branch, mostly because there was a prominent chockstone, which would give us some security. We’d only taken two ice screws, my blunt ones at that (as Pat pointed out), and I had one of them, so big falls on to the belay were not recommended. I managed to thread the chockstone by tying two slings together and throwing a krab over. Not that it mattered as the ice was so good, though it looked thin from below. Now confident, another awkward chockstone was ignored as the ice led on to a comfy snow ledge which was obviously above the difficulties. I couldn’t help noticing that we were only level with the start of Lady’s Gully so there must be a long way to go. Pat’s 200m pitch soon solved that, then we soloed to the top.

Back to the car in daylight; either we were in Fast Track promotion from the Constabulary or more likely the winter season is well on. As for the grade, it reminded me of Comb Gully but with more steep bits. Perhaps more like Vanishing Gully, but my memory of that some 30 years later is that it was much steeper. So we decided on IV,4.”

Simon Richardson is a passionate Scottish winter climber
View all posts by Simon Richardson →
This entry was posted in New Routes and tagged An Teallach, Andy Nisbet, Pat Ingram. Bookmark the permalink.