The Solution to Does Anyone Recognise This Route?

Posted on February 12, 2013 by Simon Richardson 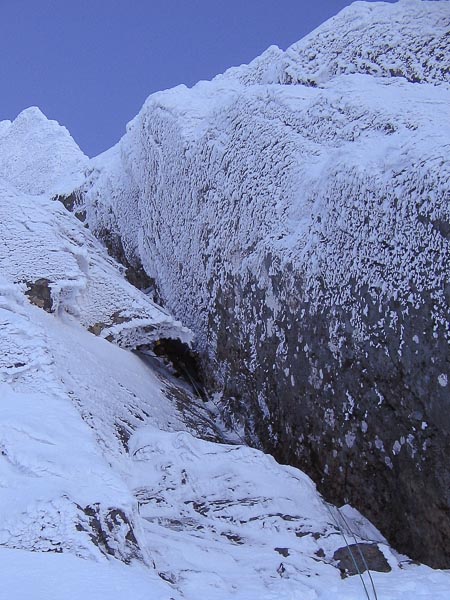 Mystery solved! The unknown route climbed by Jeff Lowe and Henry Barber in March 1976 is Clough’s Chimney (VI,6) on Comb Gully Buttress. Michael Barnard sent me a photo of the route from February 2010, which clearly matches the shot of Jeff Lowe climbing the same pitch in March 1976. Thanks also to Tim Neill, who also recognised the route.

“That’s definitely Clough’s Chimney,” Michael told me. “The sloping ledge below Jeff is also prominent in my picture – I remember it well as that’s what you’d soon be hitting once past the initial gear!”

The history of Clough’s Chimney is interesting, and the first ascents list of the Ben Nevis guide states:

W 1960 Jan 8    Clough’s Chimney I.S.Clough, J.M.Alexander The first ascensionists followed the line of Comb Gully Buttress and traversed right from below the bulging ice pitch and climbed the upper half of the prominent left-curving chimney. The lower half of the chimney was climbed by G.Perroux and partner in the 1990s and named Les 40 Degree Rugissants. Complete ascent as described by S.M.Richardson, R.Clothier, R.Goolden 16 Apr 2000.

Clough and Alexander originally named the route Comb Gully Buttress, but to distinguish it from the now more commonly climbed Grade IV version (by Ian Fulton and Davy Gardner in January 1971), which is based on ice, I renamed it Clough’s Chimney in the 2002 edition of the Ben Nevis guidebook. Ian Clough was clearly going very well at this time. A few days before he had made the first winter ascent of the technical Rogue’s Rib on Secondary Tower Ridge, and both routes were climbed a full month before the celebrated Smith-Marshall week that culminated in the first ascent of Orion Direct.

So the next edition of the Ben Nevis guidebook will have Jeff Lowe and Henry Barber as the first ascensionists of the complete line of Clough’s Chimney. Back in 1976, the focus on Ben Nevis was very much on climbing pure ice routes, so Jeff and Henry’s ascent was a difficult mixed route for its day, and comparable to Ian Nicolson and Rab Carrington’s ascent of the upper part of Gargoyle Wall climbed the following season.

It’s always nice to unravel a little piece of history – many thanks to everyone who helped out.