Posted on February 13, 2013 by Simon Richardson 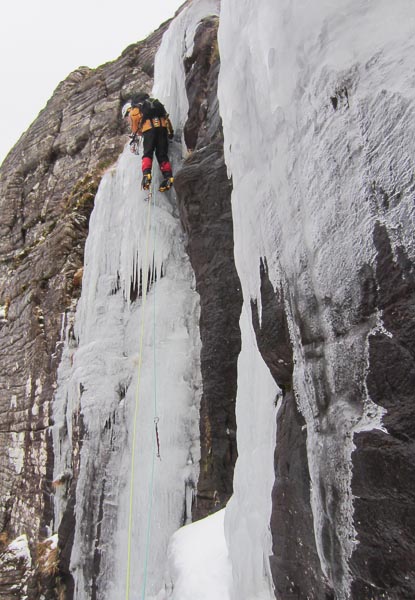 “Just to let you know that the team you mentioned in your Free Tibet post is still active occasionally!” Des Rubens writes. “Dave Broadhead and I visited the North Corrie of Cul Beag on January 26. We went there to get away from the high avalanche hazard elsewhere and take advantage of the amount of ice around on the watercourses. We climbed the left-hand of three ice lines which lie about 150 metres left of Left Buttress and are really on Meall Dearg, a subsidiary peak of Cul Beag.  The other routes looked quite easy, although no doubt enjoyable.”

“It is quite a low venue so not often in condition.  But having been into Beinn Udlaidh the week before, when there were eleven cars plus two small vans at the parking (on a Thursday!), it was lovely to have a lonely corrie to ourselves!”