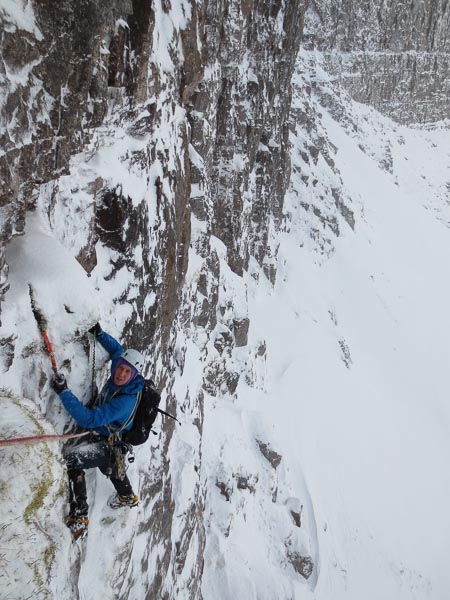 Jason Currie on the first ascent of Immortal Memory (IX,9) on Beinn Eighe. “To climb a completely new winter-only line up the middle of Far East Wall – for me this was hitherto the stuff of fantasy,” Guy Robertson wrote later. (Photo Guy Robertson)

I’m beginning to lose count of the number of difficult new Guy Robertson routes this season, as they are becoming an almost weekly occurrence! As if to prove my point, Guy snatched another outstanding new route on Beinn Eighe with Jason Currie on January 26 – Immortal Memory (IX,9), a winter-only line on the Far East Wall.

“We had originally planned to go somewhere a bit different,” Guy told me, “but the bad weather forecasted for later in the day was enough to put us off. I was pretty sure that Beinn Eighe would be in as good if not better condition that on my previous visit (for Shoot the Breeze) and the Far East Wall area seemed as likely as anywhere to be sheltered from strong westerly winds.  This proved an accurate assessment, and we arrived at dawn to find the Far East Wall pretty much plastered from top to bottom, and no wind at the base of the routes. The route in question takes the very prominent line between Colgarra and King of the Swingers, and was named Immortal Memory, in part as that is exactly what its given us, but also as a nod to the Bard himself (it was Burn’s Night the night before our ascent).

When we were stood below the line I actually didn’t think it was going to be that hard, which is why I suggested trying it (bearing in mind Jas doesn’t get out much these days).  I could hardly have been more wrong – two of the three pitches were long, sustained and technically quite hard – very strenuous around the various overhangs – although the protection was generally fail-safe.  I think a grade of IX,9 would apply in this case, though it’s always hard to tell when questing into the unknown.  Most importantly, the climbing was amongst the very best of the best on Beinn Eighe, being as steep and intimidating as any of the routes, but very dirty and vegetated in places so a proper natural winter line.  It was definitely up there with the best adventures I’ve ever had in Scotland – really pushed to the physical limit and hanging in the balance right to the end!”