Advice from a Caterpillar 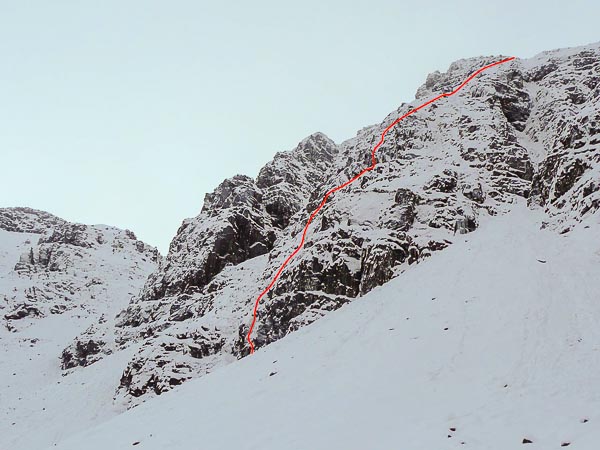 The line of Advice from a Caterpillar (III,4) in Coire na Poite on Beinn Bhan. The 180m-long route lies right of Teapot Buttress and ends on the A’ Cioch Upper Ridge below its main difficulties. (Photo Dave Riley)

“We had intended to climb March Hare’s last Saturday,” Dave explained, “but heavy wet overnight snow had resulted in the gully avalanching sometime on Friday night. We decided to play it safe and work our way around to Teapot Buttress and head up to the ridge via that; however on checking the guidebook we noticed the buttress to the right wasn’t listed. As time was getting on we decided to climb that instead, reasoning from the slopes below that it couldn’t possibly be more than about Grade II.

The climbing was mostly straightforward up turfy grooves and ledges but with a noticeable lack of good protection and belays. Some sections were deceptively steep, and the second pitch provided the most interest culminating in a short, sharp Tech 4 corner leading to easier ground above. Our decision to stick to a buttress was justified as the freezing level seemed to rise during the day and when the sun hit the cornices above Silver Tear they collapsed one by one and sent good size avalanches down the face – quite the spectacle from our viewpoint! The line we climbed approximates to the one in the attached picture and is about 180m-long, Grade III,4.

In keeping with the Alice in Wonderland theme we decided to call the route Advice from a Caterpillar. The reason being that you would have to have eaten the mushrooms before deciding to climb it…”

2 Responses to Advice from a Caterpillar