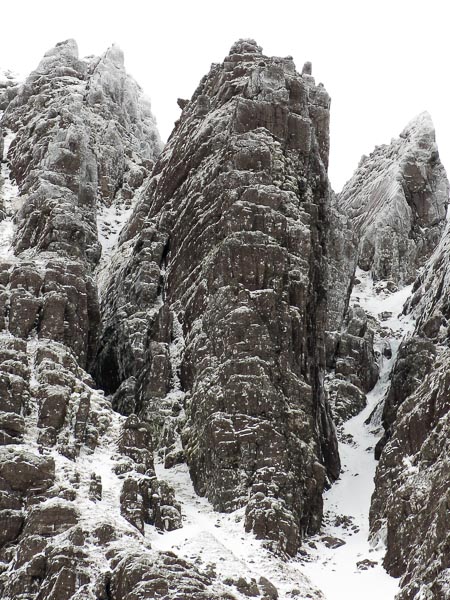 The impressive Flake Buttress on Beinn Dearg Mor. The winter line weaves its way up the front face of the buttress at VI,6 via a series of hidden grooves and chimneys. Above is a long connecting ridge with a final two pitches up the buttress in the top left of the photo. (Photo Simon Richardson)

Roger Webb and I were keen to make best use of last week’s high pressure, so arranged a visit to Beinn Dearg Mor on Thursday January 24. This remote Corbett hidden behind An Teallach has an attractive north-facing corrie, but the long approach has deterred the majority of visitors. Apart from Roger that is. Inveterate North-West explorer, Roger already had two new winter routes to his name on the mountain.

The plan was to make a winter ascent of Flake Buttress, a summer Severe first climbed by A.Parker, J.Derris and I.Richards in 1952. Roger has been intrigued by Parker’s exploits in the Northern Highlands for a number of years, and with routes like the improbable Main Buttress on Slioch (climbed solo), they deserve greater recognition. Parker himself stands out as one of the great Scottish mountain explorers of his era.

For my part, I had wanted to visit the corrie ever since my great friend Chris Cartwright made a the first winter ascent of the impressive Central Buttress (V,5) with Iain Stevens in February 1995.

As advertised the approach was long, and even though it felt we had made rapid progress, it took five hours before we were standing underneath Flake Buttress. Rearing up like a skyscraper, it was without doubt the finest feature in the corrie. The problem was that we couldn’t see how to climb it, and knowing the pedigree of Parker, his Severe could be anything up to HVS. With pressure mounting we spent an hour of precious daylight climbing the gullies either side of the buttress to scout out a line.

Roger was confident that once we started it would slot into place, and of course he was right. We used an overhung turfy fault to gain the buttress from the right, and then followed cracks and grooves, more or less up the font face of the buttress, to where the angle eased. Our line had coincided with the guidebook description in part, but we were in for a shock when an unsdescribed narrow ridge led across a neck and onto a big upper buttress.

Eventually at 6pm we arrived on the summit ridge with nine pitches and nearly 300m of new winter ground below us. Lean conditions in the side gullies meant that our descent option now led over the summit. We were six hours from the car and ten hours from home, and both had work commitments next morning. It was going to be a long day’s night!

12 Responses to A Long Day’s Night