Posted on February 3, 2013 by Simon Richardson 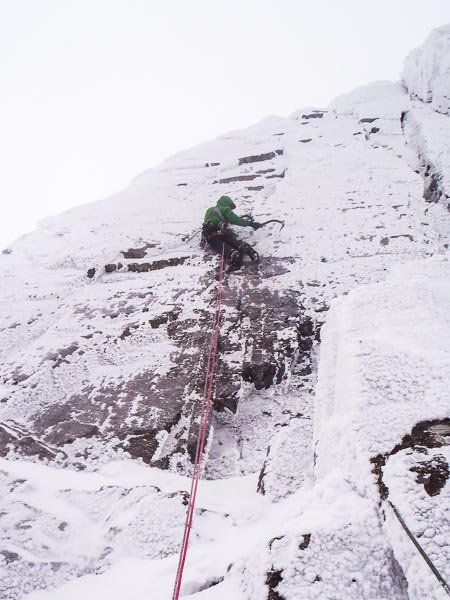 Donald King on the first winter ascent of Engineer’s Crack (VIII,9) on Buachaille Etive Mor. This steep two-pitch route on the North side of Crowberry Ridge is rarely in winter condition, but it fell to a well-timed and determined ascent just before the late January high pressure weather system broke. (Photo Mike Pescod)

On Friday January 25, Donald King and Mike Pescod notched up a significant first winter ascent in Glen Coe by climbing Engineer’s Crack on Buachaille Etive Mor. Engineer’s Crack lies on the north-east side of Crowberry ridge (to the right of Rannoch Wall) and was first climbed with some aid by Hamish MacInnes, Charlie Vigano and R.Hope in September 1951.  Nowadays it is climbed free and graded E1 5b.  Donald had waited over ten years to climb the route; the cold easterly winds blowing on to the Buachaille through the previous week finally brought the route into winter condition, and the wall was white with rime.

“Donald fell once and was very disappointed not to get the on sight,” Mike told me. ‘However, he got back on and climbed it second go. The protection is quite good and the second pitch is much easier. The route is quite steep, much of it is on dinky footholds and a few flat hooks. The step right near the top of the wall is the crux but it’s really quite sustained and the climb is not over once above the crux. We’re not very good at grading things but Donald’s first stab was VIII,9. I managed to climb it all however, so it can’t be so hard!”