Posted on February 4, 2013 by Simon Richardson 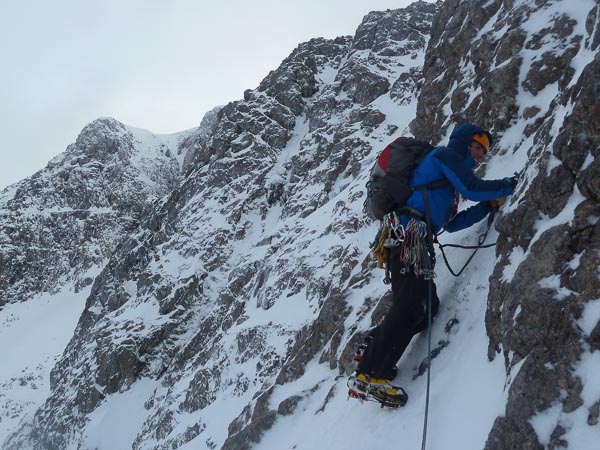 Andy Hogarth on the first ascent of Dairy Milk (IV,5) in Stob Coire nam Beith. This corrie, which lies high on the north-east side of Bidean in Glen Coe, is normally less crowded than neighbouring venues, and there is plenty of scope for variation for those enjoying mountaineering style routes. (Photo Andy Nelson)

On Saturday (February 2), Andy Nelson, Andy Hogarth and Dave Brown made the first ascent of Dairy Milk (IV,5), which takes a line between  No.2 Buttress” and “Left Wall in Stob Coire nam Beith.

“It was a pleasant mixed line giving around 200m of climbing in the alpine idiom,” Andy explained. “The route links snow terraces/ramps via short walls and corners on turfy rock, starting at the V-shaped slab immediately right of Arch Gully, and provided a fine journey with great scenery.

Conditions in the corrie were a little tricky, with unconsolidated snow on buttresses, but the turf margins were frozen with ice forming quite readily. The going was very slow for teams on Diamond Buttress due to loose snow, but Sunday’s thaw should settle things down somewhat.”