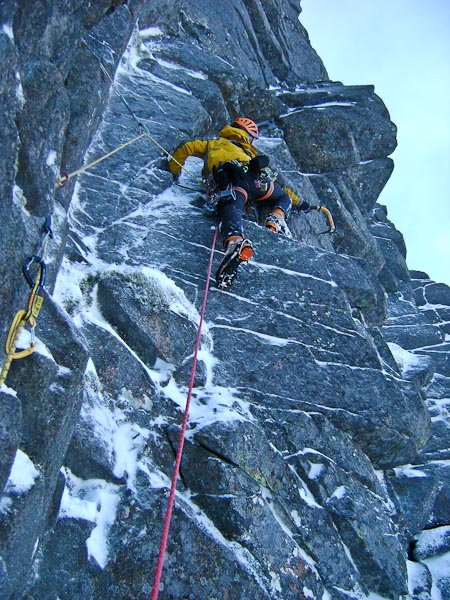 Pete Macpherson moving up towards the overlap and crux ramp of The Mummy (VIII,8), a winter version of Mullahmaloumouktou on Lochnagar. “Pete drew the short straw and was soon absorbed in some rather intricate, wobbly and quite pokey climbing to mantel into the right-trending ramp, which led past a token Pecker and shaky peg to a committing mantel onto a little pedestal at its top,” Guy wrote later on his blog. (Photo Guy Robertson)

Some late news – on January 23 Guy Robertson and Pete Macpherson made the first ascent of The Mummy (VIII,8) on The Cathedral on the Southern Sector of Lochnagar.

The Mummy is a winter version of Mullahmaloumouktou, a summer E2 first climbed by Dore Green and myself in July 1999. The route follows the zigzag ramps on the mummy-shaped tower at the left end of the crag, and when climbing it in summer I was aware that it would make a good winter climb. I returned the following February with Chris Cartwright (we were on good form and had made the first winter ascent of The Crack on Ben Nevis two weeks before) but after I had pulled over the overlap on the first pitch I was unable to make any further progress. The ramp was covered in a uniform layer of powder and I couldn’t find any placements or cracks for protection. Reversing the overlap was not an option, and teetering on tiny holds it was only a matter of time before I fell off.

When I eventually fell I was surprised how long it took before the rope came tight, and I came to a stop just above the belay. Three runners had pulled and I was held by a Hex 9. Fortunately I was unhurt (although my back felt jarred for several days afterwards) and we scurried off right and climbed Sepulchre (V,6), an excellent Greg Strange-Brian Findlay addition from 1987.

The fall made me reassess my approach to winter climbing as I’d taken a long fall the previous season from Red Guard on Carn Etchachan when an axe failed. Once again, several pieces of gear ripped and I fell a long way and was lucky to escape with just a few bruises. These are the only two (significant) winter falls I’ve ever taken and I’ve been particularly careful ever since. The disturbing lesson from my two experiences was that even apparently good protection can pull if the cracks are at all icy.

Guy and Pete had no problem, of course, on their ascent of The Mummy, although I was a little relieved to hear Guy describe the ramp pitch that I fell off as the crux of the route and rather spicy!