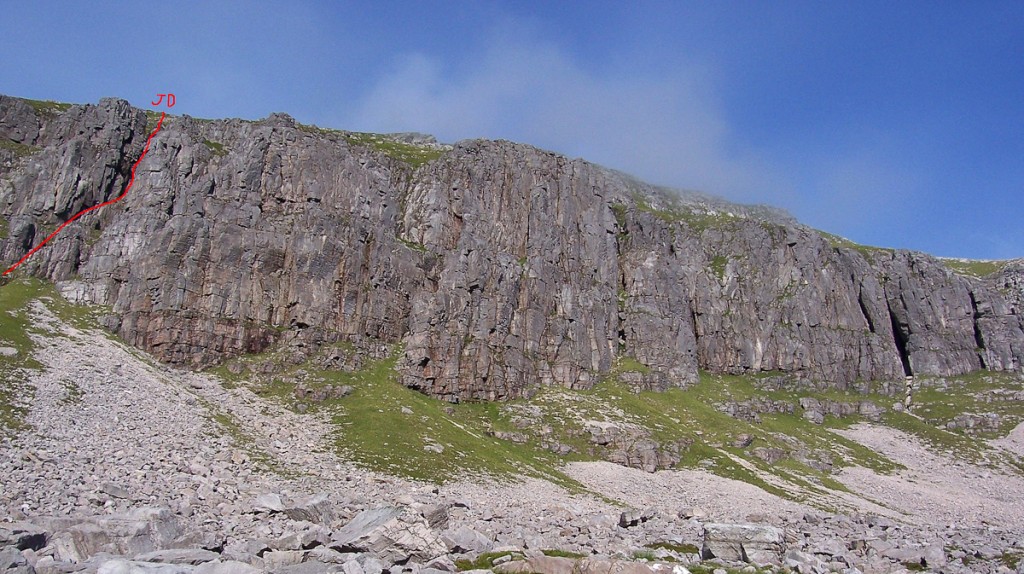 The Pineapple Cliff on Beinn Eighe (in summer conditions) with the line of Jammy Dodger (III,5) marked. The gully is much deeper than it appears from below and the grade could be lower with a good build-up. (Photo Andy Nisbet)

Andy Nisbet had an exciting adventure in Torridon today (March 5):

“You just never know how jammy you might be until the last moment. Things weren’t looking good. I’d postponed my client’s visit because of the lack of snow, then my replacement partner Dave had decided to buy a house on the best day of the week. So I’d been racking my brains for a good solo venue and with the rainfall radar suggesting there had been a fair bit of snow in the north-west, I decided to go to the Pineapple Cliff on Beinn Eighe to try a gully line I spotted a few years ago. The guidebook photo showed some short steep chimneys so I thought I ought to take 25m of rope and a half rack.

But arrival in Torridon was worrying; there really didn’t seem to be much snow. I was asked by some folk in the car park whether the big Grade I gullies on Liathach were complete and I had to admit they weren’t. But I’ve been pleasantly surprised by snow conditions on Beinn Eighe before, even when the hillside facing the car has been completely black as it was today. And I was rather committed. So I set off in warm sunshine just to have a look.

It was better in Coire Mhic Fhearchair but not fully winter and as I set off down towards the Pineapple Cliff, still in warm sunshine, even the rock was dry. Still, at least I could make a summer ascent of the gully. At least the cliff was out of the sun but the rock walls were bare. It was a bit of a surprise to find a large patch of neve under my gully, probably the largest patch on the whole of Beinn Eighe and still frozen in the shade. So crampons on and up into the gully. I was really amazed how deep it was, and as it snaked into the steep cliff the deeper it got, always with a base of neve. As I climbed up, I remembered an old report about the last unclimbed easy gully in Scotland and thought smugly how wrong it had been (this was it, maybe?). But then I felt a bit disappointed that it was long way to come for a Grade I, especially bringing a rope.

But you just never know, and at the last turn the gully suddenly ended in a deep cave enclosed by smooth walls and topped by a big roof with icicle stalactites. It suddenly made sense. I remember abseiling into a deep gully with Brian Davison after we’d been avalanched many years ago after making the first winter ascent of Sidestep. Fortunately we didn’t like the snow conditions and had kept the rope on while Brian set off up from the top of the cliff towards the summit above. Soon the slope avalanched and Brian was swept back over the cliff. I took some force too but my single nut belay held, at least partly because the rope caught in a crack. About three metres of rope sheath was torn off and Brian sprained his ankle. It was also dark by this time and the weather was deteriorating. The slope above was several hundred metres of high angle windslab, so we took the only option of abseiling back down the cliff to a very long walk out. One abseil into a hopeful gully saved us, before Brian had to limp for several hours and I had to carry both rucksacks up over the ridge of Beinn Eighe and back to the car. There was so much snow by this time that we couldn’t even find the path and ended up a few hundred metres down the valley from the car park.

It had puzzled me for years where this gully was, and as time went on, I just assumed the excitement had exaggerated its depth. Now I’d found it again and it looked like it was having the last laugh. I really had no idea how I was going to finish and a retreat with the long walk loomed. But there had to be a way; I did have a rope and some gear, even a couple of pegs, which are good for back-rope belays as they take an upward pull. There was a hopeful groove on the left of the cave, but when I climbed into the cave, it took an unfortunate resemblance to the crux groove of Sassenach. A ledge on the right wall did look more hopeful but I wasn’t sure how I would get on to it, whether I could stand in balance on it and what there was to pull out on to a bigger ledge above. The rock in the cave was rotten but after about ten minutes I did manage to get a reasonable peg where its wall met the roof and a slightly hollow nut below.

I admit I was thinking more of aiding out but I did realise that my belay was actually higher than the ledge and wondered if I could tension on to it. As I planned this manoeuvre, I found out that I could just bridge the gully enough to get a leg on to the ledge. But I was still uncomfortably stretched across the gully and a hopeful crack was just out of reach. After an enforced retreat to give my legs a rest, I found a better position and could just reach the good crack. Two nuts in this meant I now had a rope above me in two directions, so there was no excuse for not making a simple step despite the commitment. As soon as I made the step, everything fell into place. The turf-topped crack had an embedded chockstone so a big pull was possible and the turf above was semi-frozen, just enough to take my axes.

I don’t think it was that hard, more my nerves, and it would probably bank out to Grade II. So Grade III,5 and I think I was a jammy dodger today. After that hour for 10ft, it was a stroll back up into the sun and the thought that actually I’d had a good day and bagged a rather good “Internet Route” – by definition a route which is too obscure and far from the road to ever make it into overcrowded future guidebooks, but would sit on the pages of the Internet in case anyone was ever inspired.”

Simon Richardson is a passionate Scottish winter climber
View all posts by Simon Richardson →
This entry was posted in New Routes and tagged Andy Nisbet, Beinn Eighe. Bookmark the permalink.