Running It Out on Lochnagar

Posted on February 27, 2012 by Simon Richardson 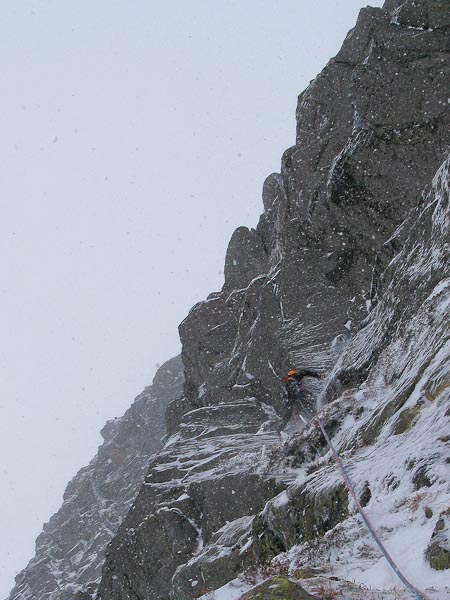 Iain Small moving up towards the crux section of a new VII,8 on Lochnagar’s West Buttress. Rather perversely, the snowstorm was welcome as it kept the cliff attractively wintry and shielded it from the sun, which typically strips this part of the cliff from mid January onwards. (Photo Simon Richardson)

West Buttress on Lochnagar sports a number of excellent winter routes, but apart from Black Spout Buttress and West Gully, they are relatively unfrequented. The climbs are long and feel rather committing, but more importantly, this aspect of the corrie faces south-east, and the upper sections of the routes are liable to strip in the sun. Climbing here is always a balance between daylight, recent snowfall and cloud cover.

West Buttress was attractively white on the morning of Sunday February 19, so Iain Small and I decided to take the gamble that the high cloud would shield the cliff from the sun. After climbing a line to the right of the upper section of Isis with visiting Swedish climber Magnus Stromhall during the Winter Meet, I was aware that there was another line cutting to the left. The problem was how to start it, but on the lower tier, to the right of the initial groove-line of Isis is a well-defined corner cutting into the right edge of the buttress overlooking the entry grooves of Western Slant. This looked good, but it was defended by a very steep and blank-looking corner.

As always, Iain was up for the challenge, but it soon became clear that even reaching the corner was going to entail some tough climbing. An old wire suggested that someone had tried this way before, but after a little hesitation Iain stepped up into a blank slabby groove and deftly made his way to the foot of the corner. Protection was difficult to arrange, but eventually Iain launched up the crux. With nothing for his feet on the marble-smooth side walls he had to make two consecutive one arm pull ups to surmount the corner and enter the groove above.

From below it looked like Iain had cracked it, but it soon became clear from his body position that the footholds in the groove were non-existent. Iain was forced to make a long and careful sequence of tenuous moves, moving further and further away from his poor collection of runners a long way below. One tiny crampon slip and he was on for a potentially leg-breaking fall. I couldn’t bear to watch, but eventually Iain reached the sanctuary of good turf and we both breathed again.

The following four pitches were sustained Grade VI, with good climbing up the square-cut gully of Isis and continuing up the fault and left facing corner above to the top. We finished just as it was getting dark and reached the car at 8pm, some fourteen hours after leaving it. It had been a long, and rather trying day!

3 Responses to Running It Out on Lochnagar