Haste Not on Meagaidh

Posted on February 23, 2012 by Simon Richardson 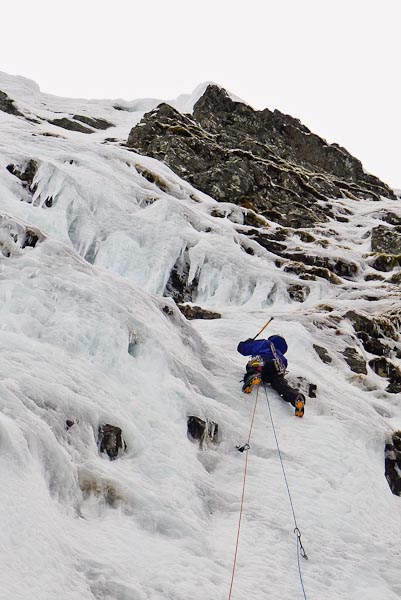 Bjorn-Ovin Bjornstad on the first ascent of Haste Not (VI,6) on Creag Meagaidh’s Post Face. Looking for a quick route to finish the day, the party initially thought they were climbing Post Haste (IV,4). (Photo Ben Tibbetts)

On February 13, Ben Tibbetts was climbing on Meagaidh with Norwegian climber Bjorn-Ovin Bjornstad.

“After a couple of good routes we wandered back down Easy Gully and fancied something easy to finish the day,” Ben told me. “The ice lines high up the gully looked great, and fairly amenable. I checked the guidebook and figured the prominent line must be Post Haste without looking or thinking too hard. It looks in the end that we did a line about 40m to the right of Post Haste, which was truly excellent, climbing, but much harder than expected. It was about 120m in all, with the first pitch 40m of stiff 5. The second pitch was 30m, and I turned the steepest section on the right as it was bulging, but was still a very sustained pitch. The last pitch eased a little and Bjornovin was forced to exit right under an overhanging rock prow to avoid a vertical snow exit. All in all really superb climbing and very sustained…. I have no doubt it has been climbed before as it is so obvious, but do you have an record of it?”

I thought at first that Ben and Bjorn had climbed The Lost Post (VI,5), a route first climbed by Kev Neal and Ian Rudkin in February 2003, but although it looks like they finished at a similar point, Ben and Bjorn started further right and took in steeper climbing lower down. Feel free to email me if you have an alternative idea!

2 Responses to Haste Not on Meagaidh