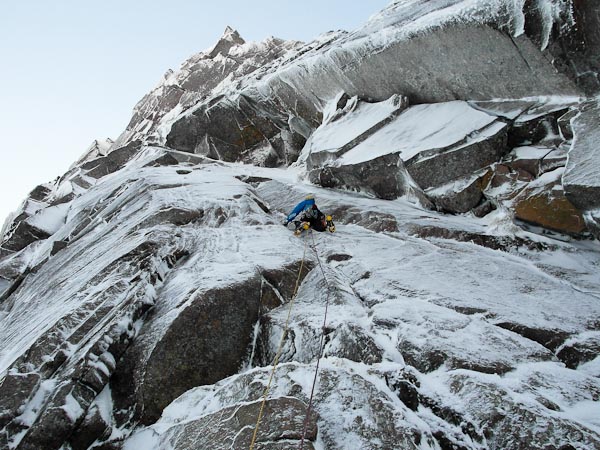 Guy Robertson on the first 5c pitch of Steep Frowning Glories during the first winter ascent of Black Spout Wall (IX,9) on Lochnagar. This outstanding route takes the stupendous line heading up and left towards the skyline and onto the headwall above. It links together pitches from Steep Frowning Glories (E6), Black Spout Wall (E3) and The Link (VS). (Photo Nick Bullock)

Lochnagar’s Black Spout Wall is one of the steepest and most impressive walls in the Cairngorms. It was first climbed in summer by a four-pitch E3 by Dougie Dinwoodie and Bob Smith in August 1976, and it is a highly sought after route. When Guy Muhlemann (one of the Lochnagar pioneers in the 1970s) climbed it with me in the early 1990s, Guy was so proud of our ascent that he said he was going to have a tee-shirt made with the logo – I’ve climbed Black Spout Wall! So you can imagine when Guy and Nick emailed me yesterday to say that they had made a winter ascent of Black Spout Wall the day before (February 6), the news was truly electrifying.

“I’d thought about it before, but having seen it once with quite a bit of ice on it I’d left it for such conditions before an attempt,” Guy told me. “However, a phone call from a very enthusiastic Bullhorn standing beneath it [on February 2 when Nick climbed The Link Direct with Tim Neill and Keith Ball] asking questions was enough to change all that! I wasn’t at all sure about the wide cracks and sloping holds of the first pitch without the ice (which wasn’t there) so we climbed the first two pitches of Steep Frowning Glories to the right, then the main second pitch of Black Spout Wall itself, before following a chimney offwidth up right to the headwall. Nick’s lead from here of the Inhospitable Crack and final bulge of the Link Direct by moonlight was particularly memorable.  It was one of the best routes and most stunningly beautiful days I’ve had in all my years on Lochnagar – the moon was so bright a pair of shades would have been useful.”

The stunning line through magnificent rock architecture, and on sight nature of the ascent (Guy had climbed Black Spout Wall as a summer route over ten years before, but it was Nick who led this pitch), makes this potentially the route of the season so far. Link Direct has already had three ascents this winter, so it was known that the wall was in condition, but the brilliance of this ascent was using the first two pitches (both 5c) of the E6 Steep Frowning Glories to gain access to the line.

“I climbed the summer line of Blck Spout Wall about ten years or so ago,” Guy explained on UKC, “but Nick led the one pitch of this we did on Monday, so effectively the whole lot was on-sight. That’s a major part of the attraction / ethics [of Scottish winter climbing]…. – vive la uncertain outcome…”