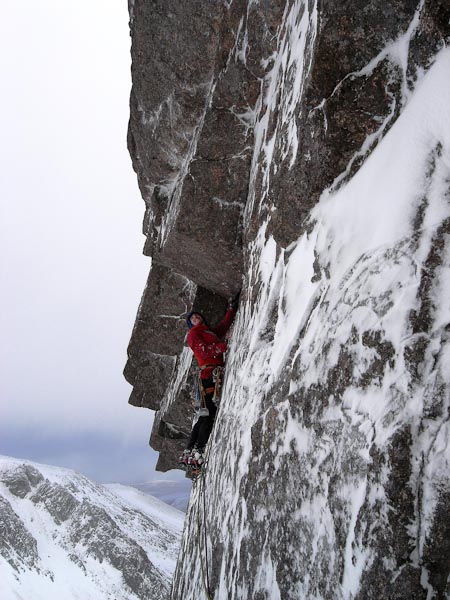 Pete Davies contemplating the crux roof of The Primate (VIII,8) on Beinn a’Bhuird during the first winter ascent. This impressive line was first climbed by Andy Nisbet and John Anderson in July 1979. “We sat in the boulder howff under Dividing Buttress for a whole day before the weather cleared the next day,” Andy recalled when he heard the news about the winter ascent. “John Anderson was still grumpy, I think, as he said it was Hard Severe. I called it HVS and it has since gone up to E1.” (Photo Donie O'Sullivan)

On February 5, Pete Davies and Donie O’Sullivan laid a long sought-after problem to rest with the first winter ascent of The Primate (VIII,8) on the West Wall of Mitre Ridge in the remote Garbh Choire of Beinn a’Bhuird.

“We lugged a Friend 6 in with us as we didn’t really know what to expect from the ‘fascinating sequence of moves through the roof’ but never placed it as there was good chockstone protection,” Pete told me. “Pitch 1 was largely banked out, so the first pitch we climbed went straight to the belay of pitch 2 up the 4c crack (30m). Donie led this pitch, it was tricky and hard work finding the gear. Some insecure, balancy moves, with some rounded hooks and thin turf in places with a pumpy section through a steepening. Our second pitch was the summer pitch 3, traversing left, through the roof and straight up the headwall. Positive climbing, good hooks, excellent protection and some nice turfy bits higher up. Really good fun! I went about 45m to belay on the biggest and highest ledge, which meant the last pitch up the left trending ramp to top out on the left arete was only 20m. We dithered over VII or VIII but went for a low VIII as it’s a long way from home!”