Gully of the Sods 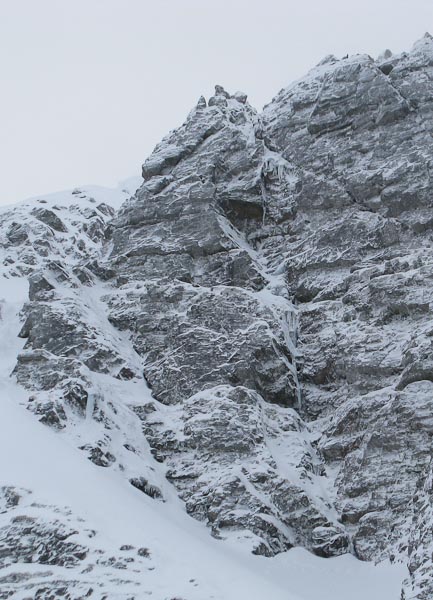 The Crescent Gully area in the Inner Corrie of Creag Meagaidh. The prominent curling line of Crescent Gully (III) lies to the left, and the new Davies-O’Sullivan line Gully of the Sods (VI,6), takes the icy line to the right. The direct line through the overhang (with the thin hanging icicle) above the halfway ledge (taken by Quasimodo (III)) was tackled by going left then right. Fly Me to the Moon (VII,8) climbs the overhanging wall to the right. (Photo Simon Richardson)

Unaware of the first ascent of Fly Me to the Moon nine days before, Pete Davies and Donie O’Sullivan also visited the Crescent Gully area of Creag Meagaidh and made the superb first ascent of Gully of the Sods (VI,6) on January 29.

“We went to Meagaidh to look at a line we spotted last year,” Pete told me. “It turned out to be a brilliant gully with two excellent pitches. Steep in places but there was lots of useful ice and turf and an exciting mixed traverse to outflank a big overhang. It was a bit like Great Overhanging Gully [on Beinn Bhan] in miniature! It’s not in the guide and I couldn’t see a mention of it in any of my journals but I may have missed something. Interestingly, before the crux of the second pitch, there was a peg with a long sling and a pair of ‘biners left on it (I’d guess from its condition that it was about five years old). Someone had obviously been here before. I reckon that the gear was either left by someone retreating or it was used as a back rope to protect the second and the ascent went unrecorded.”

It turns out that the retreat gear was over ten years old and Pete and Donie had indeed made the first ascent. The direct version of the route had been attempted in the winter of 2000. The team had their heart set on the direct line through the roofs, which they were unable to climb, so they abseiled off leaving it for another day.

3 Responses to Gully of the Sods