Posted on February 9, 2012 by Simon Richardson 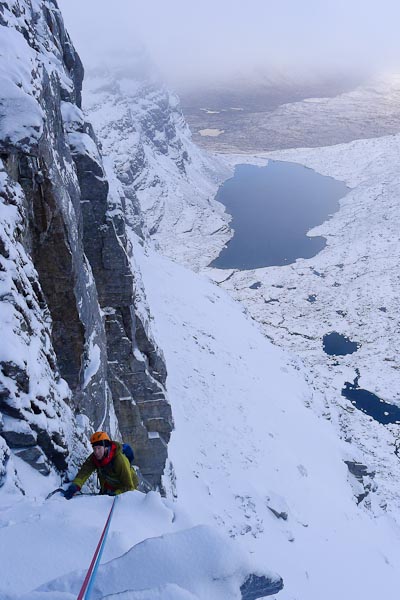 Andy Inglis reaching the second belay during the first free ascent of Rampart Wall (VII,8) on Beinn Eighe. “The crux (on the second pitch) involves levering the full head of an axe into a horizontal break in the quartzite wall to the left; pulling round to the left; committing to a thin horizontal torque with the other axe; pulling further round to the left; hooking a crack line before heading upwards once more,” Jim Higgins wrote on his blog. (Photo Jim Higgins)

On January 28 Jim Higgins and Andy Inglis repeated Rampart Wall on the Eastern Ramparts of Beinn Eighe. This sensational summer HVS was first climbed in winter by Andy Nisbet, Brian Davison and Dave McGimpsey in March 2002.

Further details can be found on scottishclimbers.blogspot.com and Jim gave me the following background behind their ascent: “Andy Nisbet has just responded with the following comment: “Second ascent of Rampart Wall, almost certainly”. If so, it is the first free ascent, as we both freed the tension traverse of pitch 3 (maybe hard tech 8?) I would be surprised if it hasn’t been repeated before, but I guess the Eastern Ramparts and Far East Walls are subject to quite fickle conditions and visited relatively infrequently in winter. Shhhh, don’t let everyone know how awesome it is out there!”

Andy Nisbet and Brian Davison have left an outstanding legacy of hard winter routes on Beinn Eighe. It is great to see them begin to get some well-deserved attention at long last!