Posted on December 9, 2020 by Simon Richardson 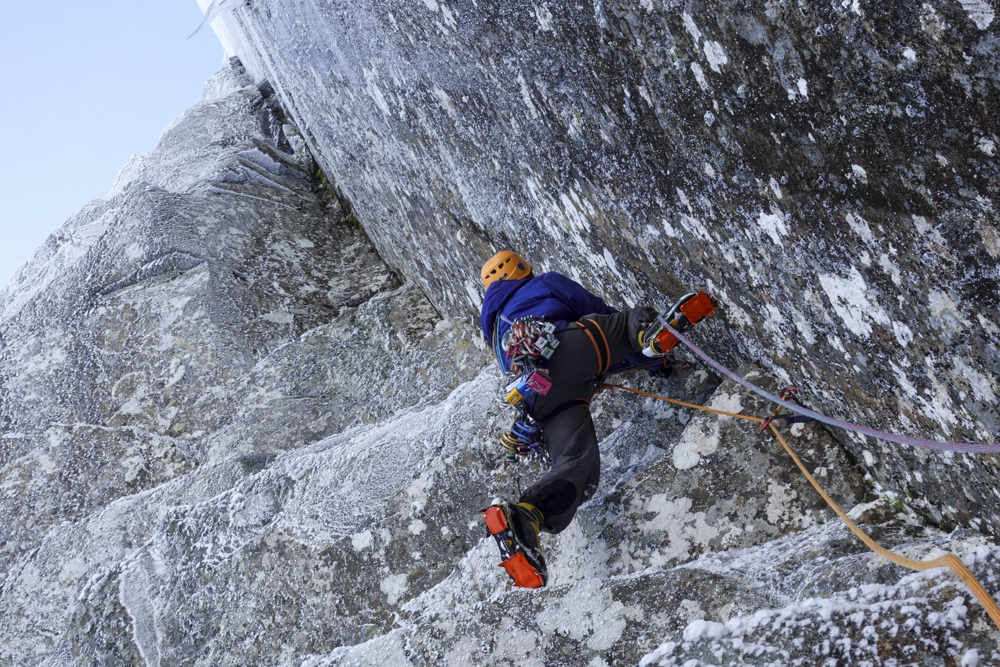 Iain Small hard at work on the overhanging groove during the first ascent of Nevermore (VIII,8) on Ben Nevis. This much-eyed line lies on Number Five Gully Buttress. Its steepness can be gauged from the hanging icicle up and left of Iain’s head. (Photo Dave MacLeod)

Iain Small and Dave MacLeod succeeded on an outstanding new route on December 7, when they made the first ascent of Nevermore (VIII,8) on Number Five Gully Buttress on the Ben. The great soaring overhanging corner on the right side of the buttress had been eyed up by several teams, but its all-relenting steepness had deterred all attempts. The buttress faces south-east which means it is very much a mid-winter venue, best climbed before the sun rises too high in the sky.

“With the recent north-easterly blast of cold air, Number Five Gully Buttress had a great coating of hoar on it, which is a rare thing,” Iain told me. “The big overhanging wall and corner are often black, receiving plenty of early morning sun later in the season so it was always going to be a good early season target.

Dave started up a wide crack corresponding to the start of Turkish but then took a direct line over a thrutchy roof/block and then an excellent layback flake to gain the bottom of a sloping ledge that led to the corner. (I think Turkish probably  climbs initial crack then steps left up walls to gain a diagonal ramp that then leads to the big sloping ledge).

The big top corner had a well-defined crack for continual torqueing, but the walls offered mostly sloping foot holds. That combination pretty much wore me out for the first day of the season, but it was a great route.

We named the route Nevermore (VIII,8) from the Edgar Allen Poe poem – The Raven. One of that genus did over our sacs as we looked down from the route. It managed to unzip both lid pocket zips and eat my pieces then throw the rest of the contents over the surrounding area. Luckily my car keys were clipped onto a tab. Later we heard Murdo and Blair had the same treatment up by Number Three Gully Buttress. So next time I will be forewarned, although I’m not sure what the solution will be to deter such wily corvids!”

1 Response to Quoth the Raven – Nevermore