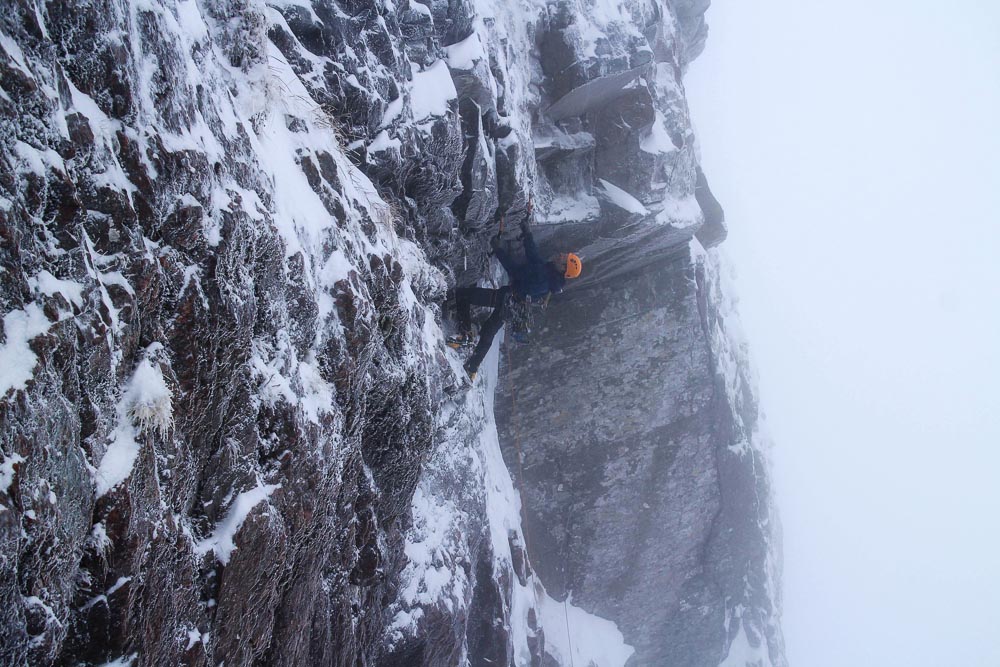 Iain Small leading the crux roof of the Moth Direct (VIII,8) on Pinnacle Buttress on Creag Meagaidh. Iain together with Dave Macleod and Helen Rennard made the second ascent of The Moth adding a new start and finish in the process. (Photo Dave MacLeod)

It’s been a busy couple of weeks on Creag Meagaidh’s Pinnacle Buttress, which has probably been in it’s best condition since winter 2005:

February 24: Iain Small and Andy Inglis climb Paradise Lost (VII,8), a new route up the centre of the buttress between Ritchie’s and Smith’s gullies. It starts up Martin Moran and Pete Macpherson’s 2010 mixed route Last Day in Paradise (VII,8) and then trends left up an icy slab and a spectacular icicle-bulge through a roof. It rejoins Last Day… on Last Day’s fifth described pitch.

February 24: And for a second route of the day, Iain and Andy make the second ascent of Eye Candy (VII,7). This spectacular series of hanging ramps and corners overlooking the right side of Smith’s Gully we first climbed by Guy Robertson, Es Tresidder and P.Hostnik in March 2005.

March 5: Iain Small, Dave MacLeod and Helen Rennard make the second ascent of The Moth (VII,8) adding a difficult first pitch and a new poorly protected finish to give the Moth Direct (VIII,8). “A long day on a big and serious face.” The Moth is another Guy Robertson creation, first climbed with Es Tressider in March 2005.

March 9: Andy Inglis and Murdoch Jamieson climb the classic Fly Direct (VII,7). “A great route on a dodgy day.” The route was also climbed a few days earlier by French climber Bruno Sourzac. Bruno is no stranger to the cliff as he made the first ascent of the mythical Extasy (VIII,8) with Dave Hesleden during the 2005 International Meet.

March 12: The weekend thaw has stripped the lower part of the cliff and the first pitch of The Fly Direct has collapsed. Making the most of the remaining ice Guy Robertson and Simon Richardson repeat Paradise Lost (VII,8) adding an Independent Finish (VI,7) up the left edge of the buttress overlooking Ritchie’s Gully.