Posted on February 3, 2018 by Simon Richardson 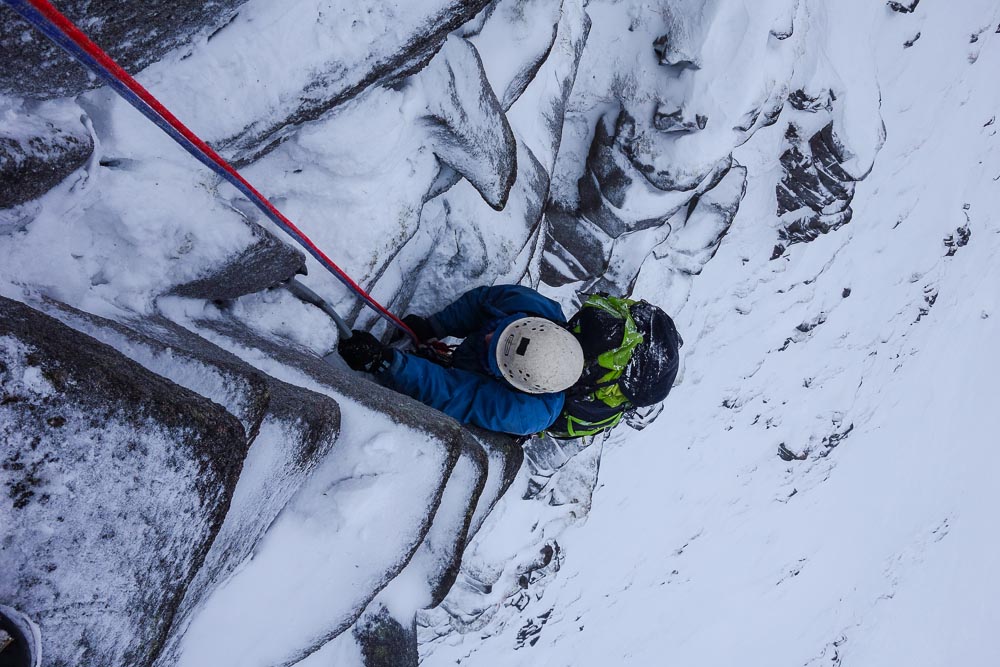 Sophie Grace Chappell finishing the steep wall pitch of Holdfast (IV,6) on Lochnagar. This three-pitch route on the gable end of Perseverance Wall had been more exposed to North-Westeries and was not buried by deep snow. (Photo Simon Richardson)

There is a lot of snow lying in useful places all over the Highlands and this winter is shaping up to be an excellent season for classic Scottish winter climbing. The snow banks are nicely oozing ice, but it needs one or two more freeze thaw cycles to create ‘Top Nick’ conditions. The challenge during this transition period is where to go when there is lots of snow and routes are not fully formed.

I’ve been a little constrained with other commitments recently, so have not had free reign on where and when to go, but on January 26 Sophie Grace Chappell and I visited Beinn Heasgairnich in the Southern Highlands. Earlier in the season Roger Webb and I had climbed Androcles, and this time the plan was to find a direct line straight up the centre of the cliff. Unfortunately, the crag had suffered from strong southerly winds blowing snow over the summit the day before. We were successful, but the VI,5 grade we gave King of The Jungle reflects long run outs, difficult to find protection and buried belays.

Four days later on January 30, a partial lull in the windy weather, tempted us onto Lochnagar. This time we were more savvy and chose to climb on a wind-scoured part of the corrie – the gable end of Pereseverance Wall that faces north-west. The plan paid off, and Holdfast (IV,6) provided an enjoyable three-pitch mixed route up the rib to the right of Windfall followed by the steep vertical wall to its left.

We played the same trick on South Craig in Glen Prosen on February 2. Once again, it was the section of cliff that had been most exposed to the wind that provided the best climbing and the result was Tequila Sunrise (IV,4), which takes the diagonal gully, steep wall and ramp left of Spanish Dinner.