High and Steep on The Ben

Posted on February 7, 2017 by Simon Richardson 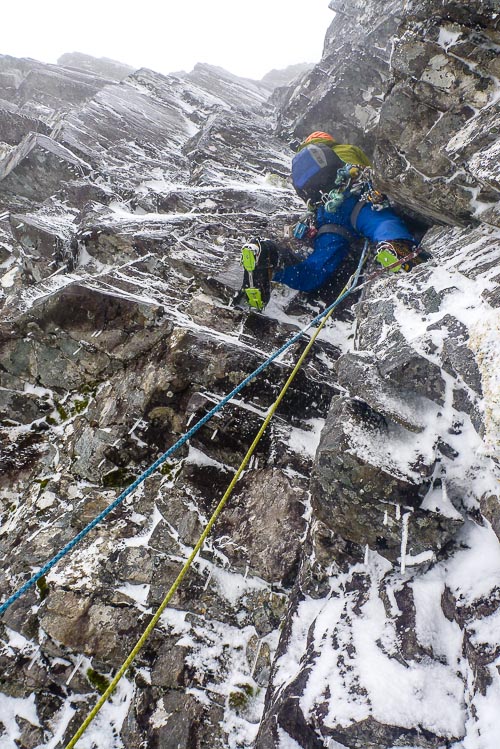 Dave Almond on the second pitch of The Knuckleduster (VIII,9) on Ben Nevis. This compelling corner-line on the front face of Number Three Gully Buttress was first climbed in winter by Blair Fyffe and Steve Ashworth in February 2007. It has now seen five or six repeats and is one of the most sought after test-pieces on the mountain. (Photo Helen Rennard)

Friday night’s snowfall fell with little wind and left a thick coat of snow on Ben Nevis. It snowed continuously on Saturday so the mountain now looks very wintry. On the classic routes, heavy snow over bare terrain made for testing conditions – two parties climbed Tower Ridge taking over ten hours apiece as they struggled to overcome low angled slabby terrain. Normally these sections are straightforward with a base of underlying snow, but the two feet of fresh powder on blank slabs offers neither purchase, nor any clues as to where the holds and lines of weakness may be. As the snow firms up conditions will rapidly improve.

Steep snowed-up rock routes high on the mountain were the order of the day. A couple of teams battled up The Slab Climb on South Trident Buttress on Saturday, but better weather on Sunday March 5 saw another ascent of The Slab Climb, together with successes on Gargoyle Wall and Darth Vader.

The two highlights of the day took place on Number Three Gully Buttress. Dave Almond, Dave MacLeod and Helen Rennard made an early repeat of The Knuckleduster (VIII,9) climbing the direct version first climbed by Greg Boswell and Guy Robertson in November 2012. Meanwhile, Greg Boswell added a superb direct finish to Babylon. Instead of traversing right and climbing the hanging chimney, Greg climbed straight up the soaring arête directly above the Gargoyle Cracks, which is arguably the most striking architectural line in the corrie.

6 Responses to High and Steep on The Ben