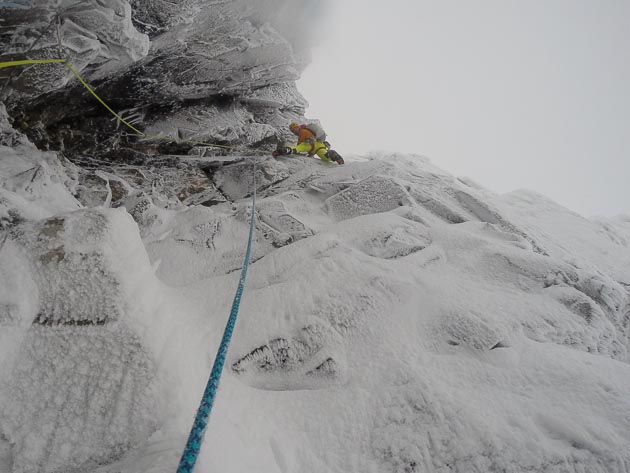 Ramon Marin on the second pitch of Neanderthal (VII,7) on Lost Valley Buttress. This modern classic was first climbed by Rab Anderson and Grahame Nicol in February 1987 and is one of the most sought-after winter routes in Glen Coe. (Photo Dave Almond)

“I drove up from Liverpool and met up with Ramon Marin on January 12,” Dave Almond writes. “Ramon is a super strong M15 ice climber but had only tried his first ever Scottish winter route with Dougie Russell that weekend. For his second route I chose Neanderthal (VII,7) in Lost Valley, which was plastered as thick as it comes and offered an exciting challenge. I took the first pitch and Ramon romped up the second. The third was intimidating to look at but was very enjoyable. We topped out at 3.30pm and I thought we were going to be able to walk out in the daylight but on descending to the base of the cliff we became embroiled in a rescue of a young lady who had taken a nasty fall and was in a lot of pain so we eventually made it to the car park for about 9pm.

I offered Ramon a rest day and used it to drive up to Beinn Eighe. We walked in and had a go at Boggle (VIII,8) but due to us walking in too slow and the first pitch taking too much time we abbed off to leave it for another day. The following day we eased down the grade and did Shang–High (VII,7) which was lots of fun. I had a great time introducing Ramon to the delights of Scottish climbing and he certainly enjoyed the locations, climbing and the views whilst I enjoyed his culinary expertise and great company!”

Less than a week later (January 20), Ramon climbed Sundance (VIII,8) on Beinn Eighe with Adam Russell. All in all, an impressive debut into the world of Scottish winter climbing!