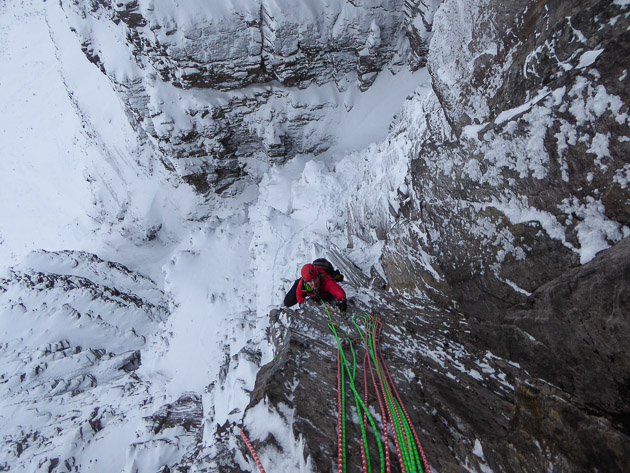 Guy Steven following the second pitch of Bruised Violet (VIII,8) on Beinn Eighe during the second ascent. The route was conceived by Ian Parnell, who made four attempts before he finally succeeded with Andy Turner in March 2009. (Photo Murdoch Jamieson)

Murdoch Jamieson and Guy Steven made the second ascent of Bruised Violet (VIII,8) on Beinn Eighe’s West Central Wall on January 20. Murdoch takes up the story:

“Guy and I had made an arrangement with each other weeks ago to do something last Wednesday.  Having had climbed on Beinn Eighe the Saturday before [January 16], I was aware that the walk in wasn’t to bad and West Central Wall was in good condition. We had a look at a few options, but settled for attempting Bruised Violet. Guy cruised up pitch 1 in no time at all.  I led pitch 2, which was fairly tricky in places – a stiff pull over a roof from the upper girdle ledge and a tricky traverse right. The arête I found quite pumpy due to a few thin hooks and keeping in balance but it was fine really. The kit is there. Not exactly the dream belay ledge was gained with gear everywhere but it worked.

It had been agreed before we set off that I would lead on and link pitches 3 and 4 together which had been suggested in Ian’s description. So I did, and it was fine – just the usual, steep physical climbing that the quartzite offers. The top pitch has probably the hardest move on the whole route – a thin pull on nothing to gain a chockstone. I almost fell off seconding. The route is a good one and Ian suggested it was top of the grade. I think it probably is. I genuinely find grading pretty difficult in winter.  Overall it was very sustained with no real desperate moves (apart from at the top but that is different!)”