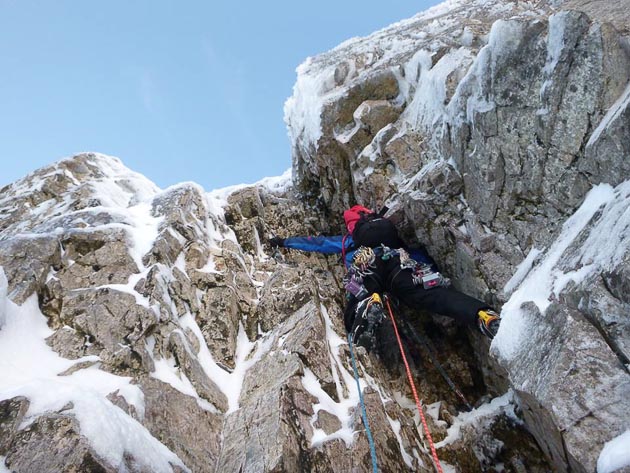 Dave Kerr high up on Fishmonger (VI,6) on Lord Reay’s Seat on Foinaven. Roger Webb and Neil Wilson made the first winter ascent of this steep-chimney line in January 1998. During their repeat of the route, Kerr and Baillot may have followed a different line in the upper section. (Photo Dave Kerr Collection)

Erick Baillot and Dave Kerr had a great weekend climbing on the quartzite cliffs in the Far North-West.

“On Saturday [January 16] Dave and I had a short easy day on Bucket Buttress on Quinag,” Erick told me. “We repeated both Great Gig in the Sky (VII,7) and Sworn to Secect (VI,7). Great Gig in the Sky is worth three stars, because despite being really short, it packs a lot of climbing in only 45m – really cool! Sworn to Secrecy is also three stars in my book, only it is slightly less difficult than GGiS because it is less sustained.

The next day [January 17] we started from Gunlaich House at 4.50am on our bikes bound for Loch Dionard below Foinaven. This section only took 90 minutes because we were able to cycle in the gillie’s Land Rover tracks! From there a two-hour walk took us to the bottom of Lord’s Reay’s Seat. The whitest and most obvious line was Fishmonger (VI,6) – it was our initial goal but we had an open mind. Pobble looked good but the chimneys were entirely dry.

I linked the first two pitches but from there the description was difficult to follow. I reached the ‘obvious platform’ after only 30m of climbing (which was the undefined crux of our route). This included steep pulls with little gear off the deck and a rather spicy traverse right. We then followed the ledge right for 20m and climbed a chimney (which had some fairly stiff moves weighing at Tech 6) to find ourselves on easier ground… the rest of the route as per the description was at least 40m to our left across smooth slabs covered by a thin layer of powder! We opted to exit up an obvious gully slanting rightwards. We finished up a 15m chimney and took a belay on the right side of the buttress. From there Tech 3 – 4 ground took us to the summit. We were back to our van at 18.10pm after 13 hours on the hill.”

Correspondence between Andy Nisbet, Fishmonger first ascensionist Roger Webb is currently ongoing. Erick and Dave may have followed the original summer line of Fishmonger that was first climbed by W.Fraser and P.Tranter in September 1964, and then taken an independent line to the top. If so, they would like to call it ‘The Mis-Plaiced Variation’.