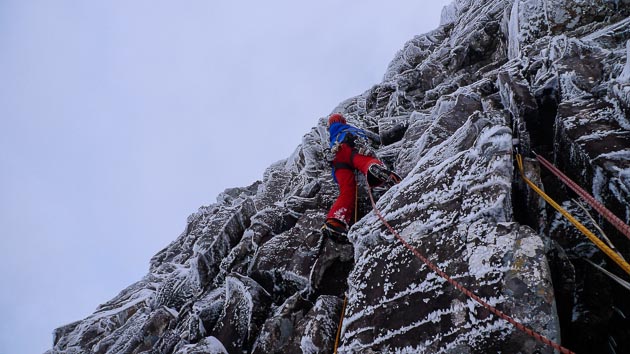 Andy Inglis high up on the fourth pitch of Reach For The Sky (VII,6) on Fuar Tholl. This sensational route on the right flank of Mainreachan Buttress was first climbed by Martin Moran and Simon Jenkins in March 1989. It was a futuristic route for its day and featured one of the first ever winter topos published in the SMC Journal. (Photo Iain Small)

Iain Small and Andy Inglis set out to make an early repeat of Snoopy (VII,7) on Fuar Tholl’s Mainreachan Buttress on January 17, but they found insufficient ice on the lower section of the route. Instead they made the probable second ascent of Reach for The Sky (VII,6). Although this route was first climbed in 1989, it not known to have had a second ascent

“We managed to traverse from the belay below Snoopy’s brown groove and gain the thin traverse ledge of Reach For The Sky that leads to the steep headwall,” Iain told me.

“We didn’t have the description for Reach For The Sky as we had set out for Snoopy, but the brown groove was not iced and looked horribly slopey and devoid of gear. I spotted the traverse ledge and just followed my nose up the steep mixed ground above. Andy then continued up the steep ground to gain an icy fault and easier ground. I’m not sure exactly how it ties in with the original line but we both felt it was Tech 7 – maybe it gets more iced up in better conditions. It was good steep climbing, pretty airy like Shoot the Breeze and it salvaged the day after backing off Snoopy. We’ll have to wait for more ice – it was amazing how little there was around Torridon given the soaking it had during the run up to Christmas!”