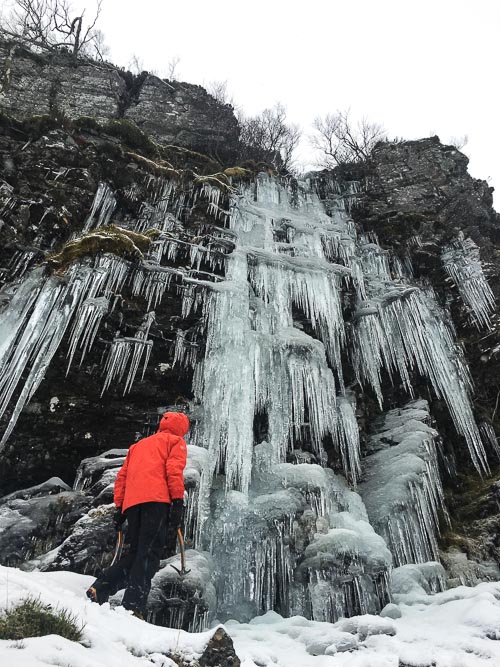 Martin Holland contemplating the 55m-high icefall of Gentlemen’s Excuse Me (IV,5) near Drumochter. The route was climbed in two pitches and descended by abseil. (Photo Gregor Ewing)

“I was out yesterday [January 21] on Geal-charn, Drumochter,” Martin Holland writes. “We were heading for the main Creag Dhubh crag, but some nasty snow conditions on the approach above the crag forced a change of plan. Gregor Ewing, Linda Gentleman and I ended up climbing a possible new line on the second crag north-east of the main crag. The crag is only 60m or so high, but the climb gave two very good ice/turf pitches. It climbed at V,5 on the day and required a delicate approach on the first pitch, if it was better formed and taking screws it might be IV,5 or possibly IV,4, so I’ve suggested IV,5 as the bottom pitch will always be steep. In good conditions it would be worthy of a star for the first pitch.

The route name choice is because Linda Gentlemen uncharacteristically came off a few times on the second, resulting in some broken ice, colourful language and apologies!”