Tips for the Visiting North American 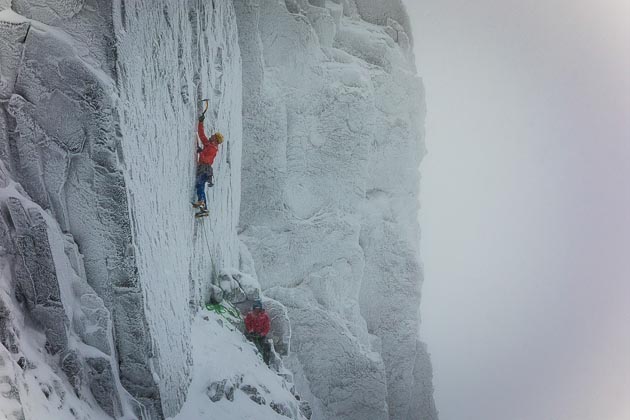 Josh Wharton concluded his trip report on the successful visit made by Steve House, Mikey Schaefer and himself in early January with some tips for the visiting North American. It’s always interesting to have an outside perspective on the Scottish winter game, so here are Josh’s tips:

Days were very short in early January, with light from approximately 8:30 to 4:30. I’d recommend going later in the season when days are longer.

If you want to climb regardless of weather and conditions (just make sure Nick is around!), the nastiness you will encounter cannot be understated. I’d recommend bringing two sets of clothing, and as many as eight pairs of gloves. That makes it possible to alternate between dry sets each day, and stay reasonably comfortable. Thick, fresh Gore-Tex is also key. Don’t bring any down.

Navigation can be a real issue. Having satellite maps on your phones, with map and compass back-up was ideal.

The Grades didn’t make a lot of sense to me, and of course are highly influenced by Nick’s mood. I found the routes we climbed to generally be in M5 to M7 range, but often quite spicy. (This was partly due to useless cams, and my inexperience with Hexes.)

Conditions are incredibly variable. If you can source local knowledge, do it! If not, the Northern Corries and Ben Nevis are apparently the most reliable areas.

Gear: a single set of cams to #4, a large selection of Hexes and stoppers (offset wired hexes seemed best), and a selection of 6 to 8 pins, with an emphasis on specters and beaks, seemed about right. We placed no screws on the routes we climbed.

A pair of junky approach skis could save a lot of energy over the course of the trip.

The CIC Hut on Ben Nevis is fantastic, and I highly recommend spending some time there. There is an excellent drying room, so you do not need to worry about drying your kit.