Posted on February 2, 2016 by Simon Richardson 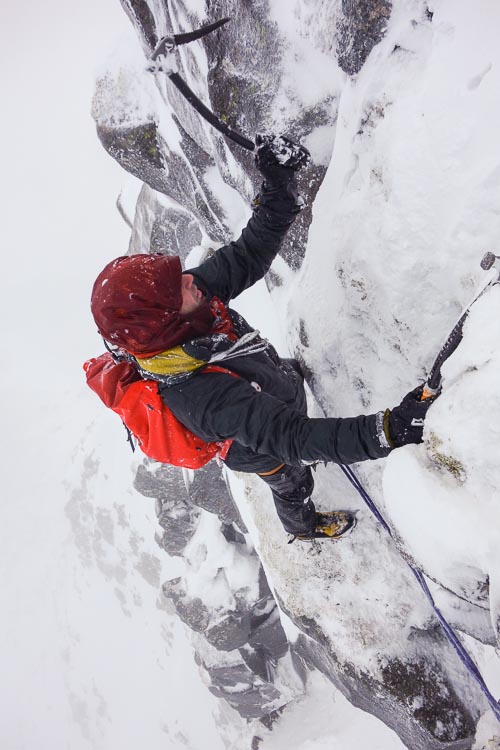 German climber Michael Rinn on the first ascent of a new V,7 on The Stuic on Lochnagar climbed during the 2016 BMC International Winter Meet. Unlike previous Meets, challenging conditions meant new routes were thin on the ground during this year’s event. (Photo Simon Richardson)

The Weather Gods did not smile kindly on the BMC International Winter Meet that was held at Glenmore Lodge from January 24 to January 30. Over 35 guests from 30 different countries were teamed up with UK hosts and let loose on the Scottish hills. Unfortunately a major thaw preceded the event and the first two days were spent dry tooling at Newtyle or sea cliff climbing in the warm sunshine at Cummingston and Logie Head. The exception was Andy Nisbet who showed his great experience by leading a party up Fiacaill Couloir on ice that had survived the thaw. Despite the non-wintery start, there were smiles all around, and for several of the visitors, climbing by the sea was a new experience in itself.

With lower temperatures, an overnight snowfall, and a temporary lull in the gale force winds, winter climbing final kicked off on Wednesday January 27, and teams headed off to the well-known ‘early season’ locations of the Northern Corries, Ben Nevis and Beinn Eighe. In Coire an t-Sneachda, Original Summer Route, Fingers Ridge and The Message were climbed and in Coire an Lochain, Savage Slit, Fallout Corner, Deep Throat, Western Route, Sidewinder and Ewen Buttress all saw ascents. Full marks went to Raphael Slawinski (Canada) and Erik Eisele (US) who both made ascents of The Vicar (VII,8) as their first-ever Scottish winter routes with Dave Garry and Tom Livingstone. The Beinn Eighe teams climbed East Buttress and West Buttress, and on Ben Nevis the best conditions were found on Tower Ridge and North-East Buttress. Unfortunately it had not been cold for long enough to bring the mixed routes into condition, except for Sioux Wall (VIII,8) which was well rimed and saw an ascent by Uisdean Hawthorn and Luka Strazar, and Ian Parnell and Ian Welsted (Canada). This was ten years after Parnell’s first winter ascent of this landmark route with Olly Metherell in December 2005.

Thursday January 28 dawned wild and windy, but it was still cold with a thaw forecast in the afternoon. Attention focused on the Northern Corries, and in Coire an t-Sneachda, The Haston Line, Houdini, The Message, Hidden Chimney Direct, Patey’s Route, Stirling Bomber and Invernookie were climbed together with Central Crack Route, Deep Throat, Savage Slit, Fallout Corner, Hooker’s Corner in Coire an Lochain. The highlights were ascents of The Gathering (VIII,9) by Tom Livingstone and Ian Welsted (Canada) and Never Mind (IX,9) by Dave Almond and Luka Strazar (Slovenia). Elsewhere in the Cairngorms on Lochnagar, Michael Rinn (Germany) and I climbed a new V,7 on The Stuic that was sheltered from the worst of the westerly gales. Across on Ben Nevis, Raphael Slawinski (Canada) led The Secret (VIII,9) in very stormy conditions.

Friday was a write-off with more gales and thawing conditions, but that evening snow began to fall and everyone prepared for one last push on Saturday January 30 to finish the Meet on the high. Unfortunately for most it was not to be, as the winds and unrelenting blizzards were too strong and all parties attempting to climb in the Northern Corries were beaten back. The only climbing in the Cairngorms took place in in Stac na h-Iolaire, a small crag within walking distance of Glenmore Lodge where a number of new additions up to Grade IV were found. Enterprising visits to Beinn Eighe and Creag Meagaidh came to nought with teams reporting black rock or avalanche conditions, but surprisingly the determined teams that ventured across to Stob Coire nan Lochan in Glen Coe to climb in the teeth of the westerly storm were rewarded with ascents of Spectre (V,6), Tilt (VI,7) and Chimney Route (VI,6).

The Meet finished that night with a disco at Glenmore Lodge that lasted well into the early hours of Sunday morning. Despite the challenging weather and conditions (almost certainly the worst ever experienced on a BMC International Winter Meet), the week was a great success. Every evening, presentations were made showing the winter climbing potential in Scotland, Canada, USA, Greece, India and Portugal. Ideas were shared, friendships made, new partnerships formed and the overseas guests returned home with a new-found respect for the Scottish mountains, the Scottish weather and for all those who climb in them.

Thanks once again to Glenmore Lodge for hosting us and Nick Colton and Becky McGovern from the BMC who set such an upbeat tone throughout the week and worked so hard behind the scenes to make the event run so smoothly. Tom Livingstone has also written a report on the BMC website.