Posted on February 3, 2016 by Simon Richardson 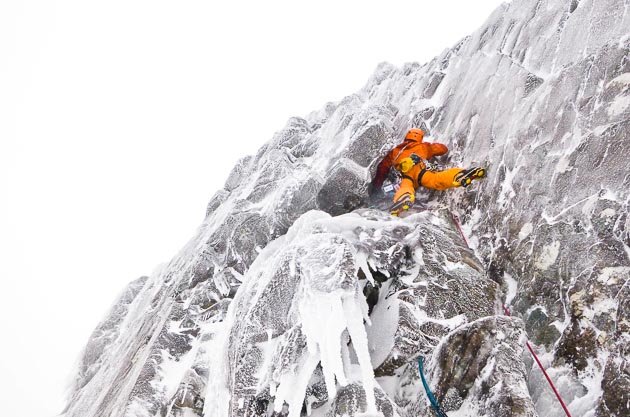 Douglas Russell on the first ascent of Tangerine Dream (VII,8) on South Trident Buttress on Ben Nevis. This prominent chimney-crack lies to the left of The Rattler and finishes on the large terrace leading into Number Four Gully. (Photo Ramon Marin)

Douglas Russell and Ramon Marin added a challenging new single pitch climb to the left side of the Central Tier of South Trident Buttress on Ben Nevis on January 31. Russell takes up the story:

“On Sunday, Ramon Marin and myself headed up to the Trident Buttress area on the Ben. We were planning on getting on Sidewinder or Strident Edge, but when arrived at the buttress we realized we had packed the selected guide instead of the definitive one. Looking at the buttress we noticed an obvious chimney and flake system on the left-hand side, so decided to jump on that as it looked like fun climbing and such an obvious line.

I started up noticing that there were some loose blocks at the bottom and lots of verglas on the rock. The gear was pretty poor but good enough to persuade me upwards. At the top of the chimney I was stopped by a bulge. Looking around for gear I managed to get a wobbly Terrier in. It didn’t fill me with much confidence and I couldn’t bring myself to commit to pulling over. So I opted to lower off / down climb back to the belay.

Knowing the top Terrier placement would take a bomber Bulldog we took the Bulldog out of the belay and replaced it with an axe. Ramon set off up armed with the spare Bulldog and was soon at my high point. He replaced the Terrier and pulled the bulge without too much difficulty and found himself at the upper flake system. We thought once we reached the flake the climbing would ease off but we were wrong. With some very thin hooks and some poor feet he made steady progress and soon found himself on the big snow bay at the top.

We are unsure of the grade. Ramon thinks it felt harder than Sundance [on Beinn Eighe] and with worse gear. We felt it had a definite Tech 8 move in it, but with low commitment value being a single pitch. We are suggesting VII,8. We may have found it hard due to the style of the climbing, but time will tell!”