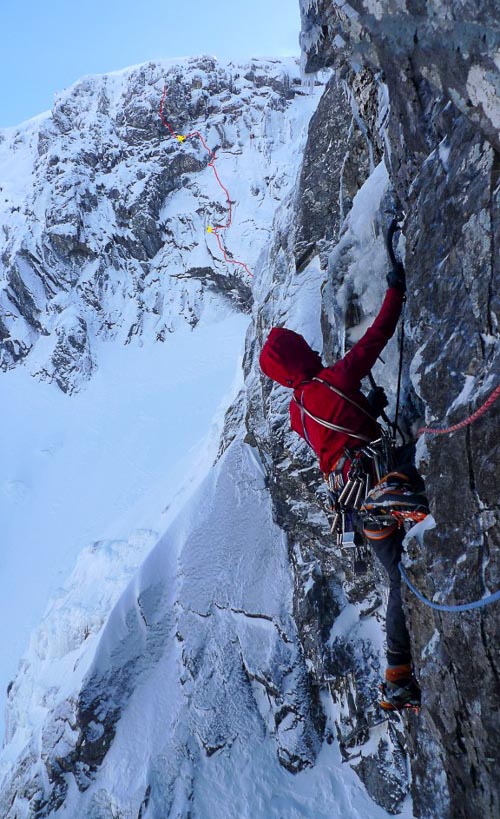 Uisdean Hawthorn climbing Clefthanger (VII,7) on the East Flank of Tower Ridge with Indicator Wall in the background. The line of Call Me Ishmael (VIII,9) is marked in red. (Photo Iain Small)

Uisdean Hawthorn had a remarkable run of routes on Ben Nevis last week. The first three days were a prelude for the main event – a new route on Indicator Wall. But even so, Boomer’s Requiem, Le Panthere Rose, Astral Highway, Riders on the Storm, Clefthanger and Kellett’s Route were a pretty good haul. Riders on the Storm and Clefthanger were particularly noteworthy, as Uisdean’s father, Doug, had made the first ascents 30 years before. Clefthanger has seen very few repeats and is now thought to be VII,7 rather than the originally given grade of V (and VI,6 in the Ben Nevis guidebook).

On day four (March 16), Uisdean teamed up with Iain Small for a new route on Indicator Wall. This takes a tenuous line between Stormy Petrel and Psychedelic Wall and was the brainchild of Iain who had been on the first pitch twice before and found less than perfect ice on both occasions. “It’s one of those fantasy lines you’ve spied out as a possibility, but in reality you doubt the chances of ever actually finding it in condition,” Iain told me.

“Iain had pointed out the line the day before while climbing Clefthanger and Kellett’s,” Uisdean wrote on his blog. “I felt fairly confident about it until Blair [Fyffe] mentioned that Iain had fallen of it when he tried it last time. ‘Hmm,’ I thought. ‘I don’t think I have ever seen Iain fall of anything, even in summer. Come to think of it even at Ratho I have spent entire sessions with him where he climbs the hardest routes with out falling off! God, what have I let myself in for?’”

After three days of bright blue skies, the day dawned murky and cloudy, but this the ice this time was better.  Soon Ian had led the serious upward traverse of the first pitch. Uisdean then set off on the next lead. “Eventually with a Peanut, small wire and half a peg I committed to the move through the overlap and onto the thin ice wall,” Uisdean wrote. “From below this just looked like another slab however once on the wall with the prospect of hitting the slab below I realised it was very close to vertical and felt steep especially on thin and slightly aerated ice. No gear for the next ten meters (the ice was too thin for screws) a definite no fall zone. I eyed a small stance with a bulge of ice above good enough for a screw and aimed for that. I made the stance clipped the screw and RELAXED!”

When Iain arrived at the belay grinning all over, he told Uisdean that he had always thought about climbing that wall but was never quite sure if it would be possible. “Uisdean did a brilliant job on the second pitch breaching the central overlap and barrier wall,” Iain explained. “From the first belay nothing could be seen (especially in the mist) and I was only able to give him a vague verbal sketch of the line that might go. He would have to go on dead reckoning. Uisdean departed from the stance and quickly navigated the central slabs then started to work hard for gear, very hard. Out of sight I could only wait and agonize over what he would find on the steep wall above the overlap. What harsh task had I sent him out on? Suddenly the ropes moved, steadily paying out until fully shot. I started to dismantle the belay, preparing to move together and hoping he had reached the good ledge traversed by Flight of the Condor. Still clipped into one wire the cry ‘safe’ came, Uisdean had cracked the pitch, one that had always seemed the most crucial and the least likely to be climbable.”

This left Iain with the last pitch through the steep, jutting headwall. “It was an almost violent transition from the delicate balance on thin ice to physicality and brute force,” Iain recounted afterwards. The first two pitches were bold thin ice but the final mixed pitch was a complete contrast at Tech 9.

“The whole experience brought to mind epic sea tales, reinforced by the surrounding classic route names (Rhyme of the Ancient Mariner, Albatross and Stormy Petrel),” Iain explained. “What name could capture our voyage? A memory of a whole chapter in Herman Melville’s Moby Dick dedicated to whiteness made me smile. It was apt and I had to admit, I had been chasing this white beast of a route for a few years now – Call Me Ishmael had to be the name.”

And at a grade of VIII,9 Call Me Ishmael is now the most difficult route on Indicator Wall.