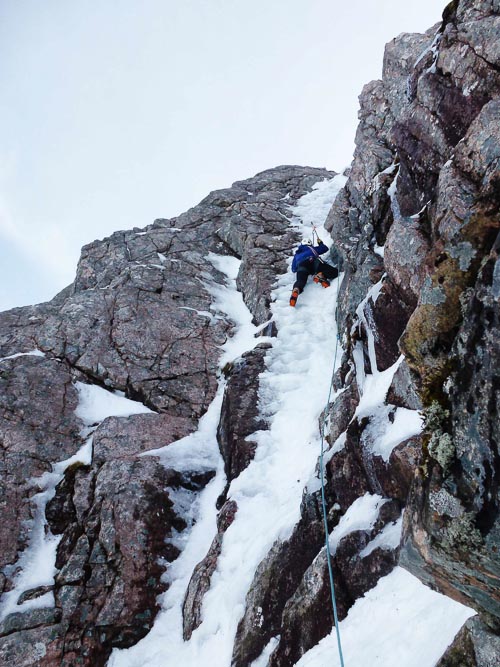 Steve Perry climbing the second pitch of Eclipse (IV,5) on Clach Leathad. Given the cliff’s proximity to Glen Coe it is likely that winter climbers have visited the crag before, but no details have been recorded. (Photo Andy Nisbet)

Such a neglected hill; Clach Leathad in proper Gaelic. My Dad used to talk about about it affectionately as one of his favourites (also easily reached when no-one had cars), but then it was demoted as a Munro. And there are strong rumours of folk ice climbing on it but no-one has recorded anything. So despite being at the top of Glen Coe, it has remained as a backwater for climbers. But pictures frequently appear in the Glen Coe avalanche blog, with such a great view from the top of Meall a’ Bhuiridh.

Come the second half of March, Steve Perry and I were looking for somewhere high and icy, since the buttresses were now too bare and Ben Nevis was too long a walk. I’ve been meaning to go there for years, but never quite got round to it, and the pictures showed grooves with narrow white stripes that could be ice.

We caught the chairlift. £10 for a few hundred feet seemed a lot, but then we did pay so market forces say it’s justified. It was a gorgeous day (March 22) and the snow was rock hard out of the sun. But most of the walk up Meall a’ Bhuiridh was in the sun, with long johns and warm trousers feeling very inappropriate. By the time we got to the summit, I was already feeling dehydrated and realised that Clachlet was still a long way off. We spent a few minutes taking photos and then pushed on.

The choice was a long traverse on steep snow or going up on to Creise and then descending. The latter allowed us to leave rucksacks so we chose it. The disadvantage turned out to be that the descent was some of the steepest snow I’ve ever descended, and with only one rope, abseiling wasn’t really an option. So we scared ourselves perched at the top of 1000ft of concrete hard neve but eventually made it down to the cliff.

The most obvious line was a thin white stripe up a big corner system on the left, so we headed for that and were delighted when it turned out to be ice, although much steeper than I’d thought. Including the descent, this turned out to be the theme for the day. I was keen to get going so set off with plans where to place our only ice screw. The ice narrowed to a foot wide in a slot but being forced into the slot from above had caused it to bulge slightly. The freeze had only been overnight so some water was still dripping down the slot and the ice was softer than ideal. A couple of finger crossing moves gained perfect ice above the slot and easier ice to a big block out of the firing line on the right, and with a great view of the next pitch.

This was Steve’s, a longer section of steep ice but without the bulge. I had the perfect viewpoint as he made steady progress, even with nuts in a crack on the right. The ice was thin in places, even with axes touching the rock, but every placement was first time and he seemed in his element. Then he ran out the rope on the upper slopes and called for me to climb. It was a brilliant pitch; we reckoned the route was at least as good as The Curtain, similar length, slightly harder but still IV,5, and in a lovely place. I ran out the rope in an extended pitch to the top and more photography from the summit cairn. The view was just staggering; white peaks in every direction; Ben Cruachan, Beinn Lui, Ben More and Stobinian, Schihallion, Ben Nevis, and an unidentified solitary peak a long way north.

There was time for another route and we were just about psyched for the descent again. It didn’t seem quite as bad this time although the consequences were the same. We chose an easier line of icy turf which soon fitted the theme of being much steeper than it looked but keeping with perfect first time placements. So again the ice screw didn’t get placed and my enthusiasm kept me going for at least 60m with our 50m rope. Above there was an ice filled groove in an isolated buttress, then Steve kept going for another 60m pitch.

All that neve was quite tiring on the legs and the return was either back over Meall a’ Bhuiridh or by traversing round it. We tried the latter but I doubt it was easier and we’d certainly missed the chairlift. But a brilliant day nevertheless. We gave the first one a topical name Eclipse, and the second Holme Moss (IV,4), being steeper moss than it looked. Of course, if anyone else wishes to record them, we’ll back down.