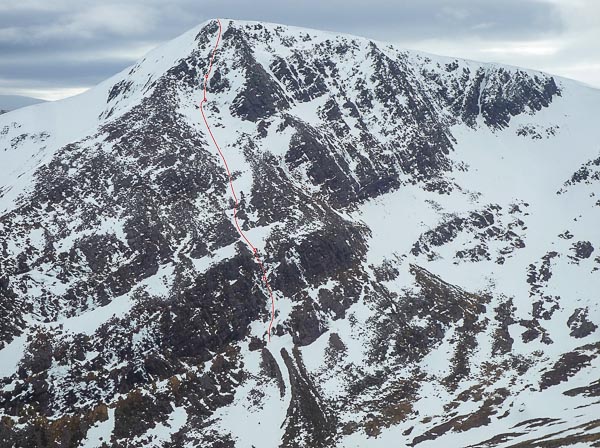 The line of Angels and Demons (IV,4) on Angel’s Peak in the Cairngorms. The classic Angel’s Ridge (I) takes the left-hand skyline and Angel’s Delight (IV,4) climbs ice (not present in this photo) up the large depression further right. (Photo Phil Ingle)

Masa Sakano and Phil Ingle made an enterprising visit to the remote An Garbh Choire in the Braeriach massif on March 22 and added a long mountaineering route to the north face of Angel’s Peak (Sgor an Lochain Uaine). The route follows snow/ice all the way, and finishes by the summit of the peak.

Angels and Demons (IV,4) is located on the left side of the north face. The first two pitches climb steep ice and snow (up to tech 4), followed by a 200m-long broad snow slope. Above a 15m ice wall (crux), leads to the final 90m icy snow slope. Masa and Phil made an enterprising ascent – the temperature was thawing to the summit and the first two pitches of the route had disappeared the following day.

“The route follows a broad in places, but well-defined feature,” Masa told me. “Once you set off, you can’t go wrong. I think it was a decent route – not many routes are 450 metres long and top out on a Munro summit!”

Postscript: A couple of weeks ago Gordon Scott (a long time Aberdeen climber but now living in KL) wrote to me with some recollections of climbing on Angel’s Peak:

“In the (very) dim and distant past I went into the bothy in An Garbh Choire one New Year time (late 1980s) with a couple of people – James Getley and his brother (all Lairig Club members) and we did a route up on the North Face of Angel’s Peak. We specifically avoided Angels Delight by climbing to its left as we were young and not very good at winter climbing; Grade IVs were hard then. Nothing really sticks in the memory of the climb apart from it was long, we topped out in mist and poor weather and negotiating some cornices at the top of Garbh Choire to get back to the bothy, which was possibly the most dangerous part of the day’s outing. I’ll see if I can find any more records of the route – I’m pretty sure we’d have come in from the right, from the bothy, and joined the present route where the lower buttress peters out into the snow and got into the central basin that way and followed it to the top up the icefall mentioned (which may not have been there). As Angels and Demons is much more direct, I’m happy that the credit goes to the guys who climbed it recently as it’s a long way in especially in a thaw.”

Gordon has now checked his records and has provided a more detailed account:

“The SMC Cairngorms guidebook (Fyffe and Nisbet) lay in the bottom of a box full of old climbing guides and other related books, so a bit of reliving history was needed before I got the bottom! We were brave (foolhardy even?) when I look at what we were doing back in the early to mid-1980s. Anyway, reading through the guidebook, James Getley, his brother and I walked in to Garbh Choire bothy on 5 January 1986. We did something on January 6 on the easy angled slopes (the icy slabs) on the north east side of Sgor an Lochain Uaine and then on January 7 we climbed the slopes to the left of Angel’s Delight to the top – the upper part of the route would approximate to Angels and Demons. We were definitely round to the left of the buttress which defines the left side of Angel’s Delight as we went back two days later to do Angel’s Delight having climbed Chokestone Gully on January 8. We used our steps from January 7 to get us to the bottom of Angel’s Delight. We never claimed the route as we expected it had been climbed before and too easy (fear of ridicule in the Lampie?) As it was mostly a snow slope with a short steep bit at the top, we viewed it as a different way to the summit.“