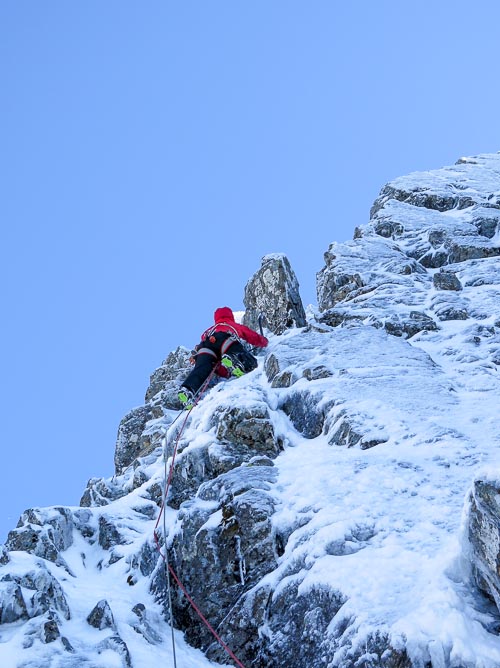 Helen Rennard on the superb arête pitch of a new V,6 on Goodeve’s Buttress on Ben Nevis. The major lines of weakness on this feature high in Coire na Ciste are taken by The White Line (and variations), Hale Bopp Groove and Goodytwoshoes, but the ground between provides excellent middle grade mixed climbing. (Photo Simon Richardson)

Sunday March 15 was a glorious day on Ben Nevis. The sun shone and the air was crystal clear. After last week’s thaw the snow had re-frozen into hard neve, and the high-level ice routes were in superb condition. The mountain was busy of course, with many teams visiting Observatory Gully intent on the thin face routes on Indicator Wall and Gardyloo Buttress. In Coire na Ciste the pace was less frantic and high up on Raeburn’s wall Dave MacLeod and Natalie Berry were climbing the steep icefall of Le Panthere Rose for the camera.

Given the ideal conditions and almost carnival atmosphere in the corrie, I couldn’t believe that I’d chosen the worst ice on the entire mountain to climb. Helen Rennard and I were attempting a new line to the left of The Alpine Princess on Goodeve’s Buttress, and I had ground to a halt on the opening moves. The initial gully of 70 degree ice looked to be in perfect condition, but when hit with an axe it dissolved into a series of brick-shaped lumps exposing bare rock beneath. The lack of purchase was bad enough, but with every move, so much material fell off that it threatened to push me off balance. Slowly and carefully I down climbed back to the belay and we reconsidered our options.

I thought I knew this part of the mountain well, so I was surprised to find a hidden V-groove up and right that I hadn’t noticed before. Steep mixed moves on good holds led into the groove, which had a ribbon of ice less than 10cm wide at its back. This time the quality of the ice was good and the V-groove led rather neatly to the top of the gully. We were on our line again and back in business!

Helen took the lead up an awkward left-leaning ramp that led to a superb narrow hanging groove in the arête between two of the variation finishes to The White Line. It was a spectacular pitch – never too hard and a delight to climb on such a clear day. Another long pitch took us to the plateau on the rope stretch and the welcome rays of the warm afternoon sun.