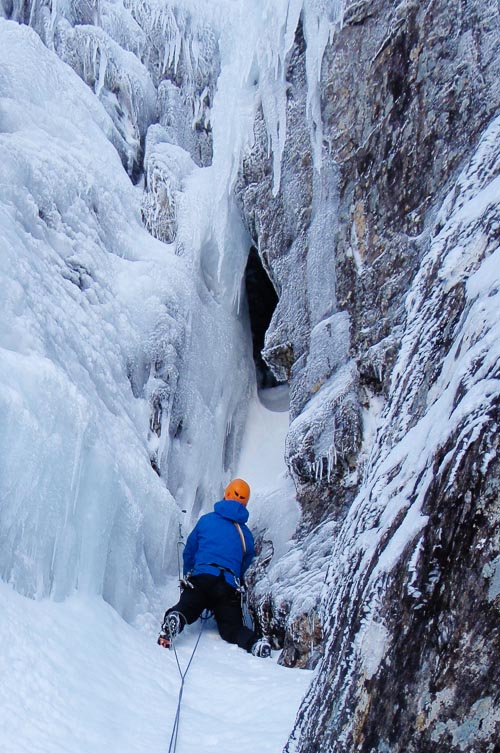 Simon Richardson approaching the through-route of Time Warp (V,5) on the North Face of Aonach Beag. The original line of Blackout is off picture to the left, and the easier-angled line of ice left of the chimney was soloed by Ewan Lyons two days later at a grade of IV,4. (Photo Roger Webb)

Roger Webb and I visited the North Face of Aonach Beag on March 14. It was a memorable day on several counts – the weather was superb and we climbed a good new route – but most importantly, it was nearly 30 years ago that we first climbed on Aonach Beag together. The climb in question was modest Grade II called Whiteout, but it holds personal significance for both of us. Not only was it the first route on the cliff, it was also a precursor to great ice lines of King’s Ransom and Royal Pardon that we climbed two years later.

As the name suggests, the weather was terrible the day we climbed Whiteout, but even so were dimly aware through the blowing snow that the steep headwall on the right side of the cliff was dripping with impressive ice features. Three days after the first ascent of Royal Pardon in February 1987, Roger returned to the cliff with John Dunn and climbed Blackout – a route based on the deep overhanging chimney cutting through the right side of the headwall. Careful reading of their description reveals that they did not actually climb the chimney, but steep ice on the left flanking wall instead. This meant the chimney itself was untouched, so it fitted the bill perfectly for an objective last weekend that required to be high, north facing and based on a natural drainage line.

Roger led a long mixed pitch to the right of the wide entry gully of Whiteout to gain the snow bay beneath the chimney. It was a deceptively difficult lead that looked straightforward from below, but was a case where 45 degree snow was really 70 degree ice and the slabby mixed walls were in fact overhanging. It was a stark reminder that the North Face of Aonach Beag is serious crag that only reluctantly gives up its protection opportunities away from the main ice lines. Roger only found one rock runner on the 60m pitch – the other two pieces of gear were ice hooks driven into turf.

The chimney was choked with ice and looked magnificent. It was deep and overhanging but a curious formation of ice appeared to block it at half-height. There was a hint of through-route, but if it existed would we be able to squeeze behind it? The lower half of the chimney looked inviting, but it turned out to be unconsolidated snow, and I was soon forced to bridge up ice on the sidewalls to reach the icy constriction.

As I squirmed deeper into the mountain I could see that the through-route was there, but it looked too tight. Chopping away the ice to collapse the feature would have not only have sent a ton of ice down on top of Roger but also turned the chimney into a desperate overhanging slot. After a couple of unsuccessful attempts I tried to squeeze behind the ice one last time, and like a cork out of a bottle, I suddenly slipped through and my head popped out through a narrow window half way up a curtain of icicles. Some wide bridging and a few steep pulls took me into the easier upper continuation gully with 60m of easier ground to the top.

Roger thought the route was very 1980s in style, taking such a prominent feature draped in ice, so we called the route Time Warp to mark 30 years of climbing together on Aonach Beag.