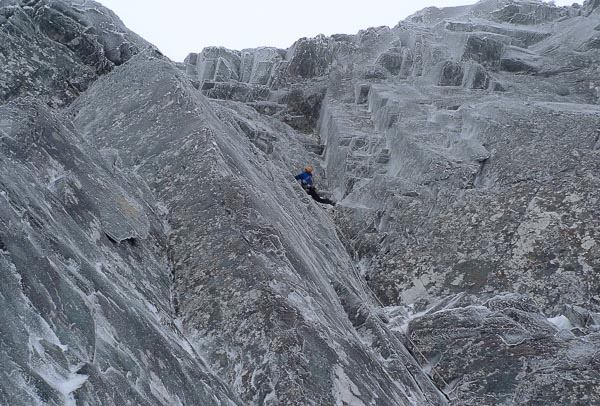 Iain Small on the first ascent of The Piece Maker (VIII,9) on the East Flank of Tower Ridge. The mixed routes in this area of the mountain are rarely visited, but the nearby Clefthanger, first climbed in winter by Arthur Paul and Doug Hawthorn in 1985, has seen a couple of repeats recently. It is thought to weigh in at VII,7 rather than the guidebook grade of VI,6. (Photo Blair Fyffe)

Iain Small and Blair Fyffe added another technical test-piece to Ben Nevis on March 10 when they made the first ascent of The Piece Maker (VIII,9).

“After all the ice climbing recently I was pretty keen to get back on some mixed,” Iain told me. “After the wild weekend conditions it was difficult to know what might be in so I headed up the Ben for a wander around Observatory Gully. It was blowing a Hoolie with a lot of spindrift and even an avalanche from above Tower Scoop but at least that flank of Tower Ridge was gathering snow on the faces. I retreated to the CIC and had an impromptu night there. Blair was free on Tuesday so I arranged to meet him at the hut the next morning, with the additional request to bring some pieces up for me as I was out of food.

The delivery was made and we headed up to the crags with an improving day forecast. Plenty of folk were heading up for the ice routes, which left us with no queues for mixed options. The area of steep rock to the right of Tower Scoop and Clefthanger had always looked like a contender for some steep mixed so we went for a look. It’s actually overhanging but at the left margin was a steep corner rising from the left end of a long ledge, after a quick discussion we decided to try that and if it was unfriendly we could always join a queue for an ice route.

The initial short corners to the long ledge were helpful and the big corner sported a crack, so game on. It was a steep pitch but with gear once the ice and frozen dirt were hacked out, it felt great to be doing some pumpy technical moves again. Moving out left from the corner to a semi hanging belay the next pitch followed a stepped corner ramp to a small perch below a vertical corner with ice drooling down and fringing the twin overlaps with icicles. This gave a bold fantastic bit of climbing that lead to easy snow and a belay below the final pitch. Icy steps and a steep ice pillar led to the Eastern Traverse and with clear blue skies we opted to finish up Tower Ridge and catch some superb evening sun at the top.

The line felt like VIII 9 and we called it The Piece Maker due to Blair’s lunch-making duties earlier. Plus it placates Dave’s nearby route Angry Chair!”