Posted on January 5, 2010 by Simon Richardson 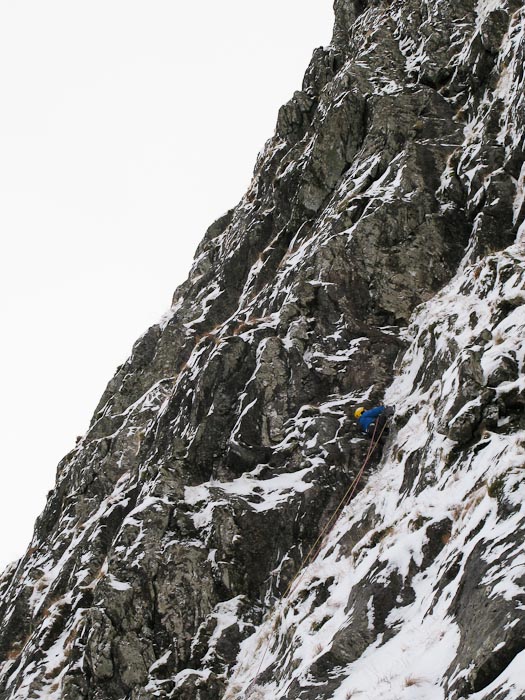 Roger Webb on the first ascent of Wild West (VII,6), Coire Dhorrcail on Ladhar Bheinn. This dramatic crag in the heart of Knoydart is one of the most remote Scottish cliffs. The 230m-long route was climbed in a 33-hour round trip from the Kinloch Hourn road. (Photo Simon Richardson)

During the deep freeze of  February 1986 I had a fantastic winter weekend climbing on Ladhar Bheinn in Knoydart with Roger Everett. On the Saturday we made an early ascent of the mythical Tir na Og up the centre of Spider Buttress, and next day we added the fine gully of Marguerite an Stob a’Chearcaill. It can be a mistake to recreate old experiences, but I was keen to return when conditions looked good.

Twenty fours years is a long time to wait, but with the cold weather forecast to last well into the New Year it was easy to persuade Roger Webb to try a Knoydart adventure. The objective was a beautiful vegetated groove cutting up the centre of Landlubbers Buttress. We hadn’t counted on the road being impassable to Kinloch Hourn, the sea level paths sheeted with ice and deep snow on the approach to the coire, but we succeeded after probably the biggest single effort I’ve ever made in the Scottish mountains. It was worth it – Wild West (VII,6) is an immaculate line in a very special place.

Our adventure began on the evening of January 2 and overall we were out 33 hours. It broke down into 10 hours for the approach, 6 hours on the route, 12 hours return and 5 hours stops (which included 3 hours sleep in Barrisdale bothy). The return took longer as we had to traverse the summit ridge and the walk back was more uphill than the way out as we had to walk the last 3 miles of road before Kinloch Hourn. On top of this there was a 7 hour drive each way from Aberdeen on snowy roads – the hour along the single track towards Kinloch Hourn had not been cleared and was on hard packed snow.

Roger and have done several of these remote outings now, and the hardest thing is starting up the route after a long approach – you already feel you have had a full day out and you haven’t started to climb. Once we committed to the route though it was really enjoyable. The walk out was slow and we were fueled by the elation of pulling off a great climb – as always the reward is directly proportional the effort invested!