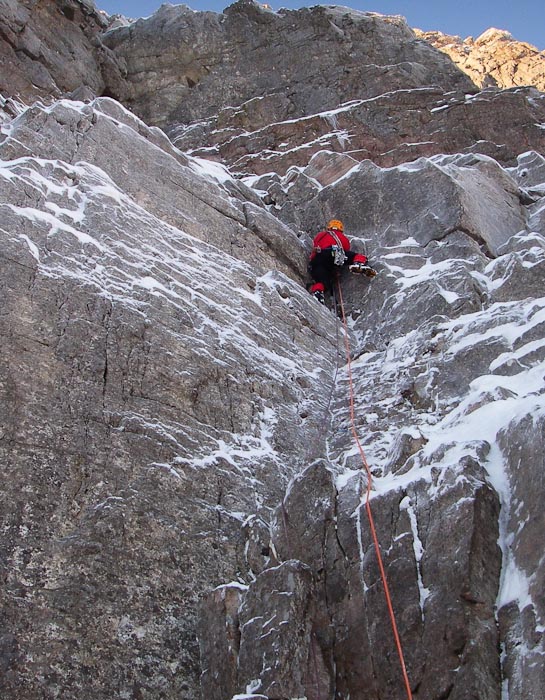 Saturday, January 9 saw the first ascent of a new VIII,8 on Foinaven by the indomitable team of Simon Yearsley and Malcolm Bass. When this pair made the first winter ascent of Pobble on Lord Reay’s Seat back in March 2006 they had belayed under the final corner of summer E1 Breakaway, and vowed to return to climb it in winter. They left their van at 5.30am, and took nearly six hours to ski through deep crust to reach the base of the crag.

They set off up a difficult series of steep cracks and overhanging grooves to join Breakaway and by the time they reached the fifth pitch it was dark. “Climbing big new routes in winter (especially in January) is an engrossing affair,” Simon explained. “Malcolm became particularly engrossed in a hideous fankle of ropes, rack, gear and clipper leashes whilst wedged in the confines of Breakaway’s upper corner. Unable to move up or down Malcolm had plenty of time to reflect on the atmosphere of a night-time shift on a remote cliff in the far far north before a frenzied burst of swearing and thrashing finally freed him to continue the inch by inch struggle up the crack to a superb pedestal stance at its top.”

There was much wild whooping and night-time screaming when the final sixth pitch led to a belay right on the windy and exposed summit of Lord Reay’s Seat. An hour back to the skis the pair finally reached the road at 5.28am – a huge 24hrs since leaving. Simon summed it up succinctly afterwards. “Inspired by the enormity of the day, we called the route The Long March.”