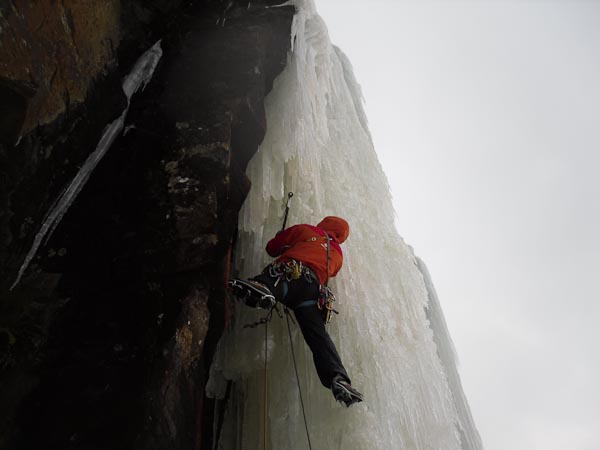 The big freeze has brought many ice routes into condition for the first time in many years. With access to the hills difficult due to deep snow, low-level icefalls are the obvious choice.

Several new ice routes have been climbed, but the most striking so far is the hanging icefall to the right of the classic Oui Oui on Creag Dubh. Easily seen from the road, this 40m hanging ice column was a well-known last great problem. It was last attempted in the great winter of 1986 when James Grossett, one of the strongest Cairngorm activists at the time, attempted to lead it. Unfortunately he was spooked by brittle vertical ice, so he called for a top rope.

Just after New Year, Scott Muir had a hunch that it was coming into condition. “I could smell that it must have been forming, “ Scott told me. He drove to Creag Dubh on Sunday January 10 to check on conditions. “I couldn’t believe it. It was good. But there were eight cars and about 20 people climbing Oui Oui. I definitely looked suspicious eyeing up the pillar and dismissing it as ‘not in good condition’ when asked. I could feel that mad internal beast coming out for a good feed. I ran back down to the car knowing it was a race against time with the weather or someone else getting in first. I had one of those mad paranoid sleeps…. I was a bit apprehensive as I hadn’t climbed steep ice for three years.”

Scott arrived with Andy Gatenby at 6.30am next morning but conditions were far from ideal. “The route was gushing with water,” Scott explained. “The fall was hollow with water running down the inside. The left side was reasonably solid but chandeliered and too verglassed for any rock pro on the wall. The middle section was very dodgy with very poor screws and placements. Overall it was pretty technical but I felt at home – being used to pillars and free hanging things. I got pretty pumped though, from being so being unfit.”

Scott graded the climb VI,6 and called it Golden Shower. The next day part of it fell down when exposed to the sun even though the temperature was still –7 degC. “That’s what makes Scotland magical,” Scott enthused. “One day something’s in – the next it’s not, and may never be for another 24 years!”