All Go in Applecross

Posted on January 1, 2010 by Simon Richardson 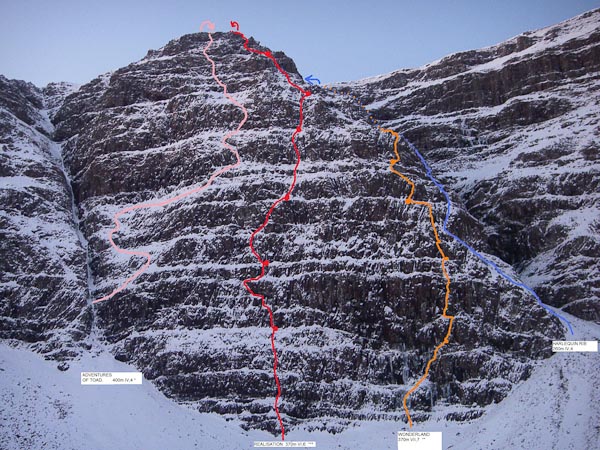 The cold weather over the Christmas holiday has seen two big additions in the Applecross mountains. First up on Christmas Eve was Martin Moran climbing with his son Alex, who made the adventurous first ascent of big cliff low on the flanks of Meall Gorm below the Bealach na Ba – Creag a’Chumhaing (crag of the defile). “This is one of biggest and steepest cliffs in the area,” Martin explained on his blog. “It is nearly 800 feet in vertical height, forming the towering prow that frames the postcard view down the pass. No-one is known to have climbed it.” After five sustained pitches the pair reached the final tier that was guarded by a series of fierce overhangs. Fortunately a steep crack-line leading to a gargoyle feature provided a way through, but another steep groove-line above meant the pair only topped out at 9pm. The route was aptly named Peace on Earth and graded VII,7. See Martin’s blog for a full account moran-mountain.co.uk/blog

On December 28 Simon Yearsley and Malcolm Bass put a long-standing objective to bed with the first ascent of Wonderland (VII,7) in Coire na Poite on Beinn Bhan. The route takes an independent line on the big wall between Realisation and Harlequin Rib.

Simon and Malcolm spotted the line when they made the first ascent of Realisation back in 2004, but they knew they needed good and cold, icy conditions for the route to go.  The first pitch was very serious (a 15m run-out on steep icy/turfy ground at one point), but each pitch after that had great climbing, often tenuous but with good gear just where it was needed.  After five independent pitches they joined Harlequin Rib for the final 150m where the angle kicked back. For more details see Simon’s website bigtreecampervans.com

“The last few pitches were done by amazing moonlight”, Simon told me. “The walk-down was superb with some of the best frost crystal sparkling we’ve ever seen… or was it the elation after such a great day!”