What a Difference a Day Makes

Posted on November 2, 2012 by Simon Richardson 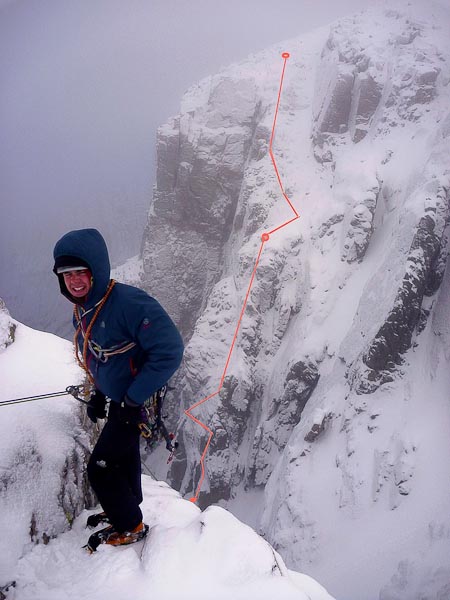 Guy Steven about to abseil into Number Three Gully on Ben Nevis with the line of El Nino (III,4) and the La Nina Start (V,6) on Number Three Gully Buttress behind. This two-pitch buttress route lies above Winter Chimney on the left wall of Number Three Gully. The original line was climbed on ice in March 1998, but the new direct start provides a more technical early season mixed alternative. (The original El Nino line starts further left and joins at the first prominent dogleg on the topo). Lying high on the mountain the buttress comes into condition quickly with the first snows of the winter. (Photo Al Halewood)

Whilst the Northern Corries have remained busy over the last few days with ascents of the early season classics such as Pygmy Ridge, Fingers Ridge and Fallout Corner, activity has now started on Ben Nevis.

On October 31, Kenny Grant and Guy Steven made the probable third ascent of Archangel on Creag Coire a Ciste. This stepped line of corners was first climbed in February 2005, and was surprisingly late in the winter development of the crag considering it is such a prominent line. Despite a high freezing level, Kenny and Guy found good conditions with a reasonable snow covering and dry well protected cracks. I found one of the pitches quite scary on the first ascent with Chris Cartwright and we gave the route a grade of VII,7, but it now seems to be settling down at VI,7.

The day after (November 1) Guy was back on the Ben once again to climb the classic Gargoyle Wall on Number Three Gully Buttress with Al Halewood. This time conditions were not so kind, and the cracks were very icy and covered in a deep layer of snow. After a pitch they decided to retreat, and headed up Number Three Gully looking for something else to save the day. They ended up climbing La Nina (V,6), a new direct start to El Nino, the buttress to the right of Winter Chimney.

“We looked up and thought it looked about III,4,” Al told me. “But as so often happens, it caught us napping and left us both hanging full arm on a superb hook in a pick-width crack as our feet popped off the sloping left side of the groove we were climbing. Guy reckoned that move was approaching the difficulty of things on Archangel the day before and there was some more good stuff higher on the pitch…”