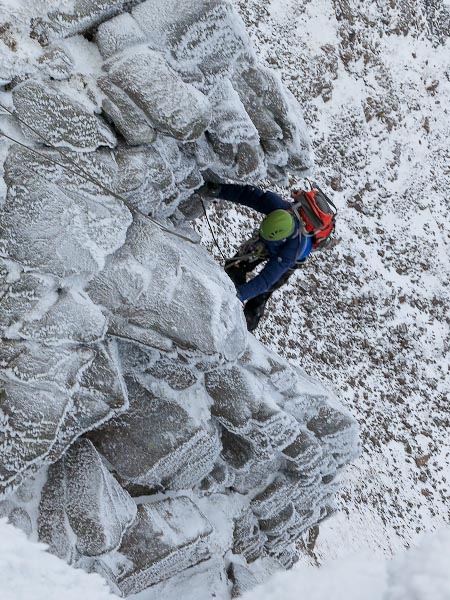 Winter has come early to the Scottish Highlands with a sharp cold snap and snow to low levels. Only a dusting of snow fell in the West, but the Cairngorms took the full blast of the northerly winds and the high north-facing cliffs came rapidly into condition.

The Northern Corries were the most logical venue to visit and mixed routes were climbed on both Friday and Saturday. This list is almost certainly incomplete, but in Coire an t-Sneachda ascents were made of The Message, Pygmy Ridge, Hidden Chimney Direct, Opening Break, Pot of Gold, The Messenger, Cruising and Invernookie. Over in Coire an Lochain, Aqualung and Fallout Corner were climbed and a team were seen on on War and Peace. With more snow forecast, and temperatures fluctuating above and below the tops over the next few days, conditions are likely to improve over the coming week.

On Saturday (October 27), Roger Everett and I took advantage of the early arrival of winter by visiting Cairn Toul. We climbed a new three-pitch Grade IV buttress in Coire Lochan Uaine taking advantage of the good travel conditions underfoot for the five-hour approach. This cliff has seen only a handful of visits, and is only a practicable proposition very early, or very late in the season when there is no cornice. Cairn Toul is the most remote of all the 4000’ers and Roger wryly commented on the way out that it was good to have got the longest walk of the winter out of the way with the first route of the season!