Posted on November 3, 2012 by Simon Richardson 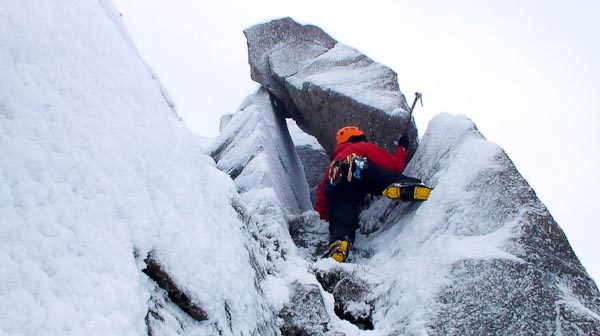 James Roddie making the solo first ascent of The Hermit’s Hole (III,4) on Aonach Dubh. If (like me) you wonder how James takes photos of himself when climbing alone, he does it by setting his camera to video record and then taking screen grabs afterwards. (Photo James Roddie)

On Friday November 2, James Roddie made the first ascent of The Hermit’s Hole, a new single pitch III,4 on the Upper Tier of the West face of Aonach Dubh in Glen Coe. It was a line James had scoped out earlier in the summer – here is his story:

“Two days ago the snow arrived in the Glen, and the storm and cold westerly winds of Thursday night made for a very snowy west face when I woke up this morning – so I decided to go and take a look.

It hasn’t been cold for very long in Glencoe yet so as I suspected there wasn’t much frozen turf, so this route was a logical choice as it is mainly on snowed-up rock. Coire nam Beith was very snowy on the approach so I was hopeful, and I was pleased to find that the route was plastered in snow and looked very promising.

A steep and awkward diagonal groove at the start was the crux, with no left footholds that I could find, but a firm pull-up on my arms got me to firmer ground and delivered me underneath what makes it an interesting route – a large balanced block forming a tunnel underneath.

Climbing through the tunnel was memorable and certainly a great place to be on my first route of the winter season. The initial groove felt about technical grade 4 but is probably a bit easier in better conditions and the route as a whole weighs in as a Grade III. As a recluse by nature, and a soloist enjoying total solitude on the west face, I decided to call the route The Hermit’s Hole”.

Simon Richardson is a passionate Scottish winter climber
View all posts by Simon Richardson →
This entry was posted in New Routes and tagged Aonach Dubh, James Roddie. Bookmark the permalink.