Posted on November 5, 2012 by Simon Richardson 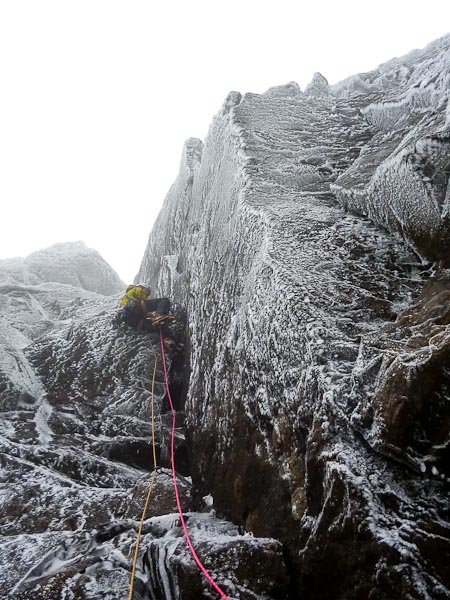 Guy Steven on the first ascent of Deliverance (VII,7) on the Stone Shoot Face of Sgurr Thearlaich on Skye. This south-east-facing cliff has a number of superb winter climbs that come into condition quickly due to their altitude of 800m. (Photo Mike Lates)

Guy Steven and Mike Lates made a superb addition to the Stone Shoot Face of Sgurr Thearlaich on Skye on Sunday November 4, with the first ascent of Deliverance (VII,7). After seeing that there was a good blanket of snow on most peaks, Guy got in touch with Mike Lates to see how things were shaping up on Skye. Mike suggested it would be worth me coming across for the weekend and the pair ended up in the Great Stone Shoot below Sgurr Alasdair. They had two days, so on the first day they climbed CD Buttress (V,6), and then eyed up a striking unclimbed corner-line before stashing the gear for the following day.

“So we walked back in and found ourselves standing below the steep corner,” Guy explained. “The first pitch consisted of steep bulges with some good torquing required and some brisk foot work followed by a bulge with next to no footholds – sustained and really fun climbing. The second pitch consisted of some awkward moves out of the alcove and over some blocks to an easier finish, which was also really good fun. We graded the route VII,7 and gave it two stars. It would be a super pitch if you linked both sections together!”

Mike had been studying this line all summer wondering what it would be like as a winter climb. “Maybe I’ll regret giving this route to Guy if I work hard on the arms and technique this winter,” he told me. “But the truth is that it was desperate and I was well chuffed to get up it on a very tight rope!”