Two in a Row for Neill and Ball

Posted on February 7, 2011 by Simon Richardson 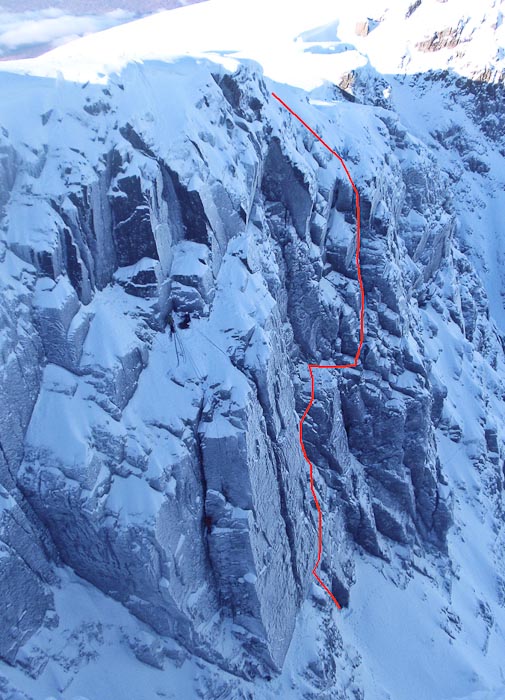 The left side of Creag Coire na Ciste on Ben Nevis with the line of Archangel (VII,7) marked. Climbers can be seen in the corner of Cornucopia and the chimney-slot of Darth Vader. The direct line up the corner from mid-height on Archangel is Avenging Angel (VII,8 - but probably harder). The right side of the arete of Archangel is taken by Cold Play (VIII,8). (Photo Tim Neill)

On Saturday January 29 (the day after their repeat of Storm Trooper), Tim Neill and Keith Ball returned to Creag Coire na Ciste on Ben Nevis.

“While on the belay [of Storm Trooper] we kept looking at the lines in the corner just right, so decided to return the next day,” Tim told me. “We don’t quite know what we climbed, i.e. whether old or new, but it was about VI,7. Nick Bullock showed me his pics of Avenging Angel, which climbs the big corner by its main line. Confusing, as the new Cicerone book shows it wrongly. Wondering if your Archangel is the same or to the right?”

Tim and Keith did in fact climb Archangel (VII,7), making the second ascent in the process. The correct line is shown in the topo above. When Chris Cartwright and I made the first ascent in February 2005 we did it in rather thin conditions, and I remember some scary pulls onto thinly coated powder-covered sloping ledges, which may explain the difference in grade. With their ascents of Storm Trooper and Archangel, Tim and Keith have pulled off two significant repeats on consecutive days.

“Both routes benefited from icy conditions for climbing, but not for pro,” Tim explained. “Archangel was a great outing, exposed, but never too hard. I’ve been on the Ben a lot with work recently. Darth Vader has had teams on it every day – it’s the route to do! Last Saturday was stunning with teams on everything – such a strong scene!”

5 Responses to Two in a Row for Neill and Ball