End of Season Catch Up 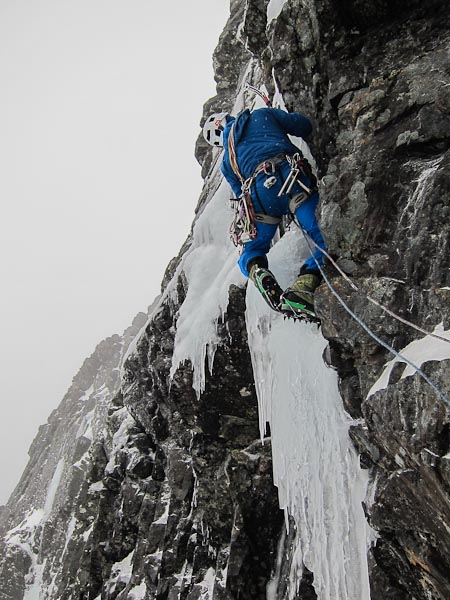 Nick Bullock making the possible second ascent of Le Panthere Rose (VI,6) on Raeburn’s Wall, Ben Nevis in January 2012. The route was first climbed led by Godefroy Perroux in April 1993, but despite several attempts, there have been no reported repeats. This year’s team reported that “after a delicate start, lots of funky ice led to the top. Recommended!” (Photo Keith Ball)

Now the winter season is finally over (yes, it was still going strong four weeks ago in the Cairngorms), I’m conscious that there are several notable routes I have not reported. Although I strive to cover significant events through the winter, some events pass me by, whilst reporting on others eludes me.

A good example of this was Charly Fritzer and Matthias Wurzer’s new route Pfugga-lule on the Happy Tyroleans wall in Coire an Lochain in the Northern Corries. The Austrians first climbed the route on almost dry snowless rock in mid January, but when they heard feedback that these conditions were not acceptable, they returned and reclimbed the route in bona fide winter conditions after it had snowed a few days later. Charly then led the route several times for the camera, but I was unable to secure a photo for www.scottishwinter.com. Copyright for these images rests with his sponsor, and it proved too difficult to obtain one.

Swiss climber Dani Arnold’s visit later in January was perhaps even more impressive, as he made an ascent of The Hurting (XI,11) in Coire an t-Sneachda. This Dave Macleod test-piece was repeated by both Andy Turner and Greg Boswell last season, and like Dave on the first ascent they took long falls in the process. Dani came close to on sighting the route but he also took a long fall from the final moves. He was back two days later to record the fourth ascent – an extremely impressive achievement considering this was his first foray in to Scottish winter climbing. Dani is one of the world’s finest mountaineers, with the current speed record of the North Face the Eiger (2 hours 28 minutes) and (more impressive perhaps) the first winter ascent of Torre Egger, to his credit. Dani said afterwards The Hurting was the hardest [technical] route he had ever climbed.

Dave MacLeod’s six-metre roof climb, Castle in the Sky on Druim Shionnach in Glen Shiel, was another significant climbing achievement, and typical of Dave, it pushed the boundaries. The pre-protected nature of the route means that it is more in the realms of a continental M-climb rather than a traditional Scottish winter route, but this does not mean that it was a safe undertaking. An upside down Pecker and a blade peg as the key protection must have offered little reassurance, and the route is so unlike any other that it is virtually unclassifiable. A key point perhaps, is that Dave has demonstrated that roofs of this size are physically possible on Scottish winter rock.

Back in January, Nick Bullock, Tim Neill and Keith Ball climbed Le Panthere Rose (VI,6) on Ben Nevis – I think this was a second ascent, and unreported from early in December, was the first ascent of the five pitch High Grade Low Grade (VIII) by Dave Almond and Duncan Tunstall on Earn Crag at the head of Glen Esk in the Southern Cairngorms. Finally, the day after his repeat of Guerdon Grooves, Guy Robertson climbed the Duel (IX,9) with Pete Macpherson followed by the second ascent of Satyr (IX,9) the next day with Pete and Nick Bullock. Three grade IXs on consecutive days was a outstanding feat, and for me this was one of the highlights of the season.

Phew, that’s it – finally up to date. I can go to bed with a clear conscience now!

2 Responses to End of Season Catch Up