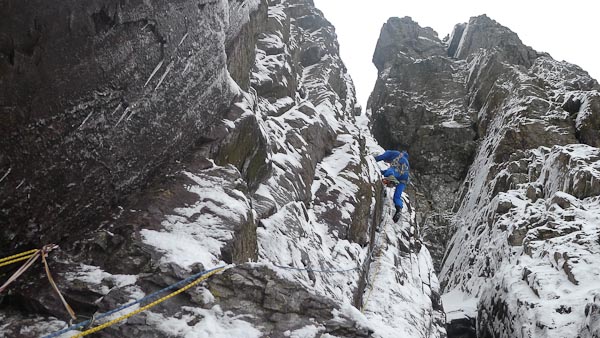 Nick Bullock on the crucial second pitch of Guerdon Grooves on Buachaille Etive Mor’s Slime Wall. After 28 years, this iconic route was finally repeated yesterday. “I felt a greater weight on my shoulders from the history rather than my climbing rack,” Nick explained afterwards. (Photo Nick Bullock Collection)

I’m just back from the International Winter Meet at Glenmore Lodge. This superb biennial event consists of 40 guests from 20 different countries climbing with 40 Scottish-savvy British climbers all under the watchful eye of Becky McGovern and Nick Colton from the BMC. The weather was kind, which meant winter routes were climbed every day but one, and a superb selection of outings were completed from straightforward hill walks to new Grade IXs. It will take several posts to describe the highlights, but without doubt the outstanding ascent of the meet took place on Saturday January 28 when Nick Bullock, Guy Roberson and visiting US climber Bayard Russell made the second ascent of the legendary Guerdon Grooves on Slime Wall of Buachaille Etive Mor.

Guerdon Grooves, which takes the daunting wall left of Raven’s Gully, was first climbed as a summer route in 1948 by John Cunningham and Bill Smith. Graded HVS 5a, it has a reputation for poor protection, and its first winter ascent by Arthur Paul and Dave Cuthbertson in January 1984 was a clear step forward in Scottish winter climbing. Originally graded VI, it was the earliest route to be given Grade VIII (pre-dating Unicorn by a full year) when the grading system was made open-ended in the early 1990s, and the current guidebook grades it IX,8. Any attempt at a rating was pure speculation however, as the route had repulsed all repeat attempts and built up a huge reputation.

“The crux of the route was actually starting it,” Nick explained. “But when I started leading the second pitch there was some really useful ice in the cracks. It was a brilliant pitch, the most stunning of the route.”

The full story of their nine-hour ascent is for Nick, Guy and Bayard to tell, but when I asked Nick about the grade he just grinned and said it may be best if it was kept an enigma. Undeterred, I asked Bayard who had just completed a whirlwind six days climbing several hard routes including a new Grade IX in the Northern Corries. “You know Simon,’ he drawled in his soft East Coast accent, “I don’t know much about this Scottish climbing game, but the route that really stands out for me this week was Trail of Tears on Lochnagar.”