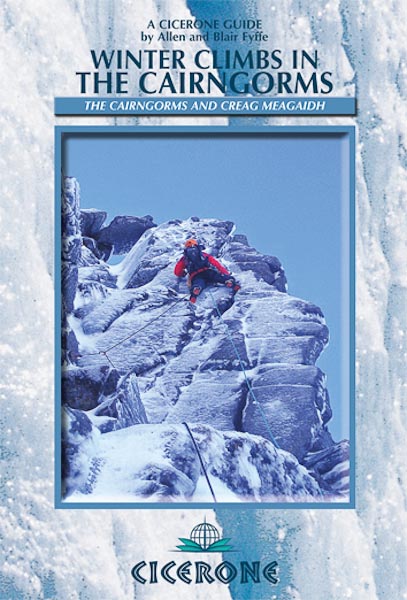 Winter Climbs in the Cairngorms, authored by Allen and Blair Fyffe, was published last month by Cicerone. The cover photo shows Neil Johnson on the top pitch of Swan Song (V,6) on Fiacaill Buttress in Coire an t-Sneachda.

I have a battered copy of the second edition of this popular guidebook on my bookshelf. It is over 30 years old (the staples are rusting) and was written by one of the world’s greatest ice climbing pioneers – John Cunningham. I have certain fondness for this little paperback guide for not only was it my first Scottish guidebook, but it also conjures up memories of woollen breeches, straight shafted ice axes and bendy Salewa crampons in an age when Grade V really meant something.

The new fifth edition, written by the father and son team of Allen and Blair Fyfe includes Creag Meagaidh as well as the Cairngorms, and reflects the change in emphasis of Scottish winter climbing from ice to mixed over the past three decades. It is a very attractive book, bright and clear and well laid out. It is illustrated with excellent crag topos (some such as Perseverance Wall and The Cathedral on Lochnagar have never been published before), and a series of superb action photos by Henning Wackerhage. Henning is the only climber I know who carries a full size DSLR with him on every route, and his resulting images are both beautiful and evocative, and just make you want to get out and go climbing.

Unlike its sister Cicerone volume (Ben Nevis and Glen Coe) that sets out to be comprehensive, Cairngorms and Creag Meagaidh is a selected guide. I feel this is wholly appropriate, because unlike the SMC definitive guidebooks that have to be fully comprehensive by definition, a selected guidebook can be more creative and point newcomers to the better cliffs and corries, and highlight not just the finest, but also the most do-able routes.

In this regard, Allen and Blair have done a superb job, especially in the Northern Cairngorms. The route choice is imaginative, and includes several recently developed cliffs such as Lurcher’s Crag and Sron na Lairige. Allen is also author of the Northern Cairngorms section of the SMC guide, knows his subject well and writes with authority. If I had to make a single criticism, it would be that the route selection in the Southern Cairngorms is a little predictable. Sure, you have to include the great Lochnagar classics, but in the main, the selection appears to be fairly conservative. For example, including a selection of routes on The Stuic, which contains some of the most enjoyable short middle grade routes in the Cairngorms, would have been a useful addition.

Overall this is a great little guidebook and a natural complement to the SMC title. A newcomer to the area may well be attracted to this new Cicerone guide, but the aficionado will probably always be drawn the SMC fully comprehensive volume (I would say this of course, because I am one of the authors). However, I suspect that even the most hardened Cairngorm climber will also appreciate the Cicerone book for its different perspective and excellent diagrams and illustrations.