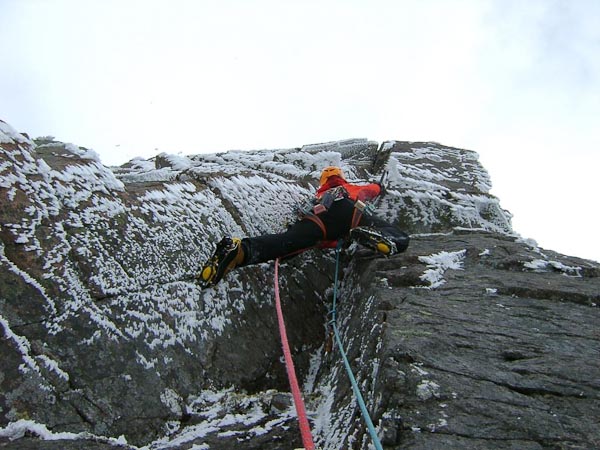 Andy Inglis making an early repeat of Minute Man (VII,7) in Core an Lochain. The route was climbed on May 16 with Guy Robertson, and the pair added a new direct start. When Brian Davison and Andy Nisbet made the first ascent in January 1997, they started up Milky Way because only the top tower was in winter nick and the lower part of the cliff was bare. (Photo Guy Robertson)

With warmer temperatures now sweeping across the country, it looks like the 2011-2012 winter climbing season is finally coming to an end. The last six weeks have been unusually cold for the time of year, which has led to resumption of winter climbing, although unfortunately only a handful of folk appear to have taken advantage of it.

Unusually, the best of the conditions have occurred in the Cairngorms. Normally it is late season ice on Ben Nevis that attracts attention, but the devastating late February thaw meant there was little snow-ice formation high on the Ben. Instead cold north-easterlies have kept the Cairngorm plateau white with deep snow and the high corries have provided good sport for those willing to get up early and make the long approach. During May, over a dozen new routes have been added to the high corries of Braeriach, Cairn Toul and Ben Macdui.

The Northern Corries have been good too, and on Wednesday May 16, Guy Robertson and Andy Inglis made an early repeat of Minute Man (VII,7) adding a new direct start. “This gave two good pitches,” Guy told me. “The second main pitch up the cracked tower being we thought as good as any other VII pitch in the corrie, and worth a couple of stars for sure!”