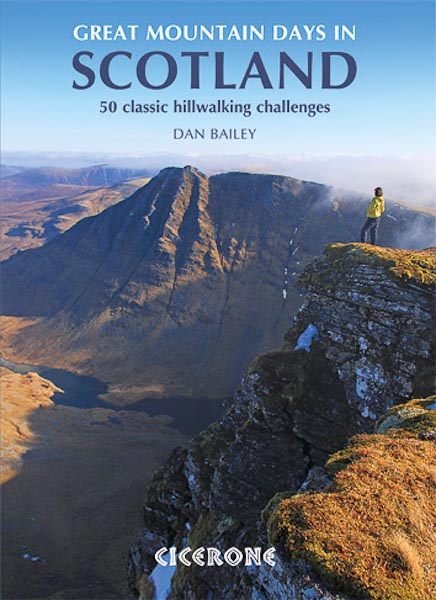 Great Mountain Days in Scotland has recently been published by Cicerone. This attractive hill walking guide by Dan Bailey covers terrain likely to be encountered by Scottish winter climbers looking to climb away from the well-known venues. The cover depicts An Sgurr from Seana Bhraigh’s summit. (Photo courtesy Cicerone)

Dan Bailey first appeared on the publishing scene in 2006 with Scotland’s Mountain Ridges. This appealing and attractive guidebook (more like a medium format book), which is well illustrated with OS-style maps and good colour illustrations, brings together the finest ridge climbs and scrambles across the Highlands. Quite deservedly, the book was well received, and building on this success Dan has written The Ridges of England, Wales and Ireland and now Great Mountain Days on Scotland, all based on the same format, and published by Cicerone.

Subtitled 50 Classic Hillwalking Challenges, this book describes mountain expeditions in Scotland that offer a degree of challenge due to their length or amount of ascent and descent. All the well-known outings are here such as the Lochaber Traverse, Fisherfield Six and Cairngorm 4000ers, but there are also a number of routes that Dan has devised himself such as the The Sgurr na Ciche Range in Knoydart. Rather than tackle this ‘Rough Bounds round’ via Glen Dessary, he describes a longer itinerary via Loch Quoich. This makes it easier to include Ben Aden (described as the ‘the roughest (and best) of all Corbetts’) but it also ‘offers an aesthetic advantage, too, as the skyline to be traversed is visible for most of the approach.’

For the most part these are lengthy expeditions that can be accomplished in a day in summer with fell running shoes, but in winter they will be demanding two-day expeditions. Dan favours this more relaxed approach even in summer, and in the Introduction he states that he considered Great Mountain Days and Wild Nights Out as an alternative title for the book. Beautifully produced, Great Mountain Days in Scotland can be considered the modern day equivalent of the Big Walks, first published by Ken Wilson and the Diadem Press in the 1908s.

Although not immediately obvious, the content of this book has a strong cross over with Scottish winter climbing, as even the most hardened mixed climber will likely spend time walking in the Scottish hills, whether it be to check out alternative venues or get fit for the coming season.Certainly when next autumn sets in, and the rock boots are put away and the hills beckon, I’ll be turning to Dan Bailey’s latest volume for inspiration.

Simon Richardson is a passionate Scottish winter climber
View all posts by Simon Richardson →
This entry was posted in Book Reviews and tagged Dan Bailey. Bookmark the permalink.