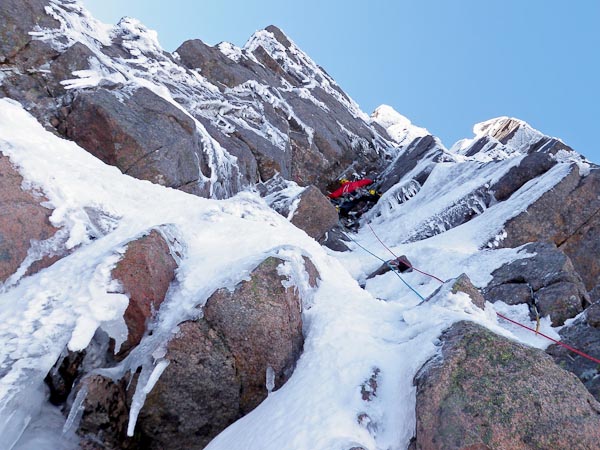 Guy Robertson on the second ascent of Swallow Tail Pillar (VII,8) in Coire an Lochain, Northern Corries. This route, which lies between Deep Throat and Gaffer’s Groove, and was first climbed in winter by M.Walker, A.Gilmore and R.Rosedale in March 2008. Robertson has had a successful run of April routes in the Northern Corries in recent years and has become a champion of late season mixed when many folk have put their tools away for the summer. (Photo Andy Inglis)

“Conditions were very challenging,” Guy told me, “as the cliff was either completely black or Patagonian white! Obviously we had to choose an area that was the latter, so we opted for Swallow Tail Pillar. This gave two good thought-provoking pitches, and I thought Andy did a particularly fine job of digging out and sending the top pitch, which was probably the crux. Overall the route was similar in difficulty to Prore so VII,7 or VII,8 about right – it’s always hard to judge these things when the rock is so deeply buried. As ever at this time of year the late start and wonderful light was as much of an attraction as the climbing itself – it was a really stunning day with full cover above 800m; almost certainly the best days skiing so far this season. It isn’t over yet either!”

Across on Ben Nevis, Pete Flanagan and Ben Giles had a productive day with an early repeat of Spartacus (VI,7) on South Trident Buttress on Friday April 27. As to be expected on this south-east facing crag, the ascent was a race against the sun which unhelpfully emerged from behind the clouds on occasion. Late season climbing has many benefits – late starts, long evenings and often benign weather conditions but any sunshine can be an unwelcome addition!