Posted on February 18, 2012 by Simon Richardson 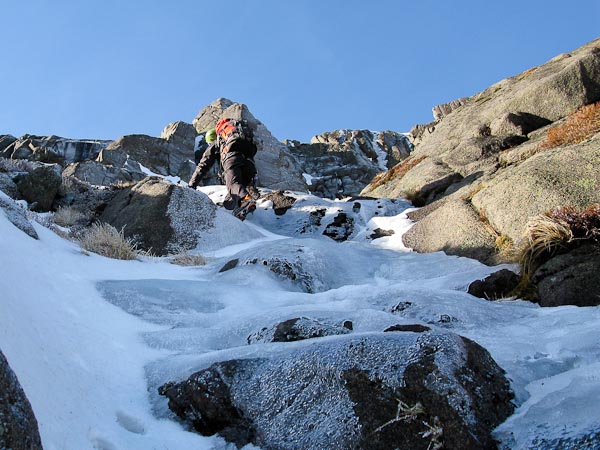 Roger Everett moving up into the hidden snow bay on the first ascent of Goulotte Cachee (IV,4) on the east side of Cairn Gorm. The route follows a streambed in summer that is likely to ice regularly. (Photo Simon Richardson)

Thaws followed by a re-freeze are a great time to enjoy easier mountaineering routes. I had been waiting for a chance to climb a new line on Coire na Spreidhe on the east side of Cairn Gorm, and last Sunday (February 12) was the ideal opportunity. Approaching rarely climbed crags with no idea about conditions other than gut feel is always a bit of a risk, but I had a hunch that the crucial ice pitch would be frozen as it is a stream in summer. Roger Everett was keen to take a look too, and we were treated to a magnificently clear morning that felt more like April than mid February.

After soloing the first couple of Grade II pitches on low angled ice we reached a snow bay and Roger led the crucial ice pitch. After that we unroped for the rest of the 300m-long route, so we were on the plateau by 1.30pm. There was time to head off to Creagan Cha-no where the shadowed north-east facing Arch Wall was still white and frosty from light snowfall the night before. A croaking Ptarmigan at the foot of our route (the right rib of the Finger and Thumbs Gully) provided the name for our climb (Ptamigan Rib – IV,5) which followed a good line but took in some existing climbing on Mac’s Crack and the steep section of Fingers and Thumbs itself. By the time we had reached the plateau the cloud had rolled in which only made us appreciate the beautiful morning even more!